New Analysis Asks Which Lincoln is Real in Gettysburg Photo 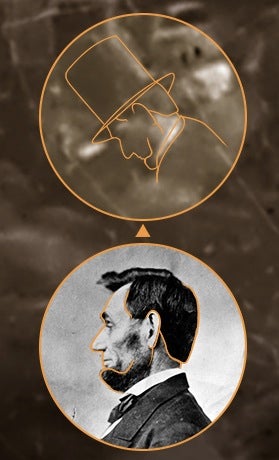 While many of us are more than happy to spend our days staring at photos blown up on our monitors, tweaking and editing to our heart’s desire, it takes a special sort of person willing to put that much time and effort into historical photos, too. Faced with aging, blurry prints, dedicated hunters pore over individuals in crowds searching for elusive figures. Like, for instance, more images of President Lincoln at Gettysburg. And a new discovery has cast doubt on which bearded, top-hatted figure was the president, and which was not.

Over at the Smithsonian Magazine they delve into the particulars in great detail, but the short version is that Christopher Oakley, former Disney animator, and teacher at University of North Carolina-Asheville, was going over photos of the Gettysburg address as part of a project with his students to recreate the famous event in 3D, when he discovered a man in the crowd that he believed to be President Lincoln.

While this would be a notable find in and of itself, as photos of Lincoln are comparatively rare, especially from the address, what makes it even more interesting is that in 2007, someone else had identified a completely different person in the photo as Lincoln. Which raises the question: which Lincoln is real? And, at a time when beards and stovetop hats were relatively common, can you truly tell from what amount to insanely huge enlargements of blurry photos?

It’s an intriguing story, as it delves into technological limitations of the time, questions of the reason the photos were taken, and of bringing information like this to bodies who view themselves as authorities on such matters. In this case, a dedicate crew of amateurs called the “Center for Civil War Photography”.

Unfortunately, it’s just about impossible to tell if Oakley is really right, or if earlier claims hold water. Both “Lincolns” are extremely blurry, and, as shown in this graphic, would take a fair amount of squinting to be convinced of either.