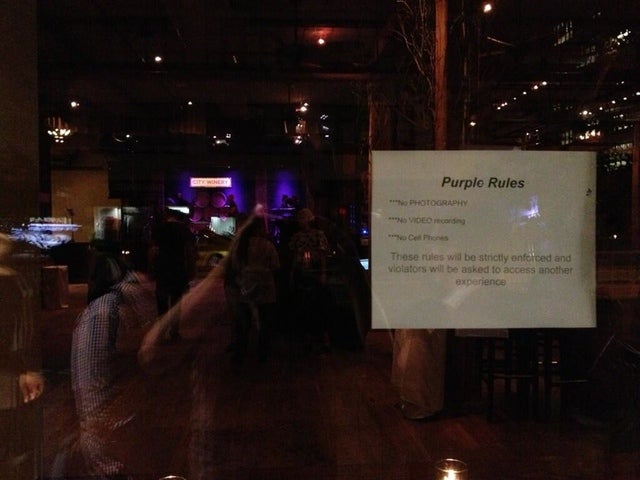 Not long ago, I wrote an article about how the banning of photography at live music events isn’t totally crazy. It’s not necessarily something I agree with, but I understand the reasoning behind it. That said, it sounds like the eccentric-but-brilliant musician Prince has taken things a little far.

The funky musician played a surprise set at New York’s City Winery last night. Upon arriving to the venue, patrons (including a reporter from Gothamist) saw a sign forbidding photography, videography, and even cell phones on the whole. Aside from the “Purple Rules” header at the top, the paper doesn’t look all that unfamiliar. However, as the Gothamist article goes on, it gets a little troubling.

“…the cell phone gestapo was out in full force. I watched as they dragged away multiple people who held their phones up just a second too long trying to capture Prince’s essence or whatever. People had their phones snatched from them in mid-air, and if they argued, they were escorted out of the building in a very non-funky manner.”

It’s one thing to ask a patron to leave if they’re breaking a rule, especially one posted so clearly around the venue, but having your phone/camera snatched out of your hand seems like its taking things a bit far. Of course, we weren’t there, and this is going solely on another site’s report. Plus, it doesn’t say whether the person doing the grabbing was from Prince’s camp or employed by the venue.

While the patrons were clearly disobeying a rule, the line of appropriateness (and legality) gets a little blurry once someone comes in contact with you or your property.

The whole thing sounds very in line with the public perception of Prince, though. He’s a notorious perfectionist and seems to like having as much control over his performances as humanly possible. Still, both photos and videos ended up making their way online, so it really is true that there’s no preventing people from capturing things, even with the threat of harming their precious smartphone.

What do you think? Is this a case of going too far to enforce the Purple Rules? Or were they justified in their phone grabbing?