In the early 20th Century, there was a brief period where the military was taking enormous "living photographs" 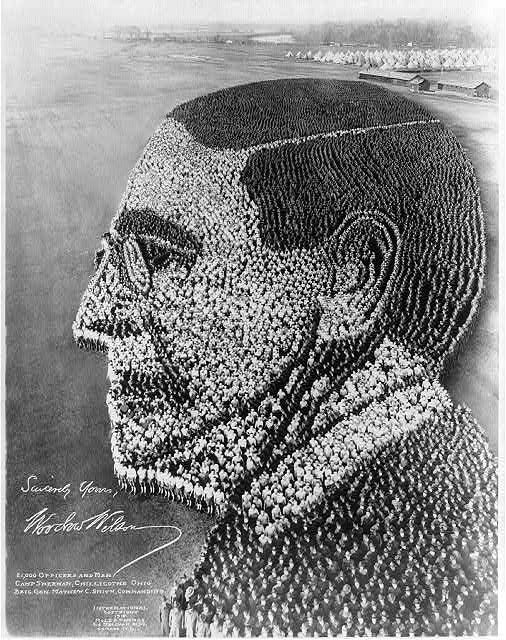 There was a brief period, starting around 1918, where the military decided that a good way to use its trained soldiers was to create enormous, perspective corrected images out of them. Dubbed “living photographs”, the technique was pioneered by Arthur Mole, and sometimes involved tens of thousands of people to craft these massive compositions.

io9 has a roundup of some of these enormous collective photographs, but the more you look into it, the more amazing the whole process seems. The compositions had to be designed to correct for the perspective of the 80-foot tower the photographs were taken from, so fewer people had to be at the base of the image than at the top. The Human US Shield required 30,000 people, and that portrait of Woodrow Wilson took 21,000. Mole worked with another photographer, John D. Thomas, and made ten of these photos, which you can see through the Library of Congress.

Being one of the soldiers in these photographs wasn’t exactly a pleasant undertaking. According to one report, 18,000 officers were suited up in wool uniforms for a photograph of the Statue of Liberty in 105° heat — and many fainted after hours of standing.

In order to lay out the image properly, Mole and Thomas put an outline of the desired image in their camera atop the tower, and then directed assistants below to place markers in the ground to match. It was a process that took weeks, and while the images were designed to originally be used to help sell war bonds, they were never used for this task.

These days, “living photographs” like this have all but died out — but in 2009, 5,000 members of the second Infantry Division in South Korea recreated one of the famous images from WWI. And this time, no one fainted.