Traveling around Britain, the Camper Obscura is used to teach people about the magic of optics from inside a converted camper van 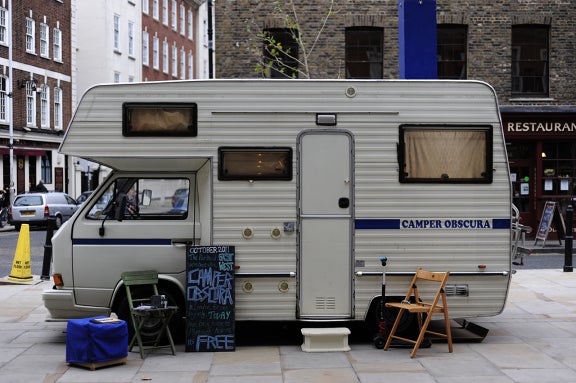 Since 2010, a modified camper van known as Camper Obscura has been touring around England. Visiting schools, fairs, and festivals, this modified 1986 camper van has brought one of the oldest photographic techniques to the general public — the camera obscura.

A camera obscura is a remarkably low-tech, and easy to craft phenomenon. You can even make one in your own house. But the Camper Obscura was designed by Matt Pontin and Jon Blyth of Fotonow as an educational outreach tool, and allows people to see a camera obscura without hunting around to try and block light leaks in their own room.

The camper is light-sealed, and has the lens of the obscura mounted above the roof of the car. It can be swivelled around 360° to see anywhere in the outside world, and is then projected down into the camper’s internals, onto a plain white sheet.

Talking to Lomography, the inventors discussed what it’s like taking someone inside the Camper for the first time:

As part of the project, Pontin and Blyth have snapped instant photos of every person who has stepped through the doors of the Camper Obscura, creating a permanent reminder of a fleeting and temporal occurrence.