DKNY Uses Photos Without Permission, Gets Majorly Called Out On The Internet

An intellectual property debacle gets a semi-happy ending 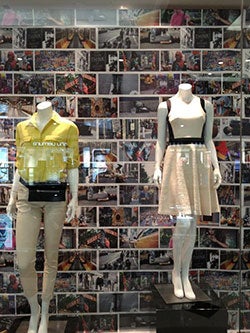 You don’t have to look far these days to find instances of images being used without compensation or even credit being given to the photographer. It’s rampant. But, one case is generating a lot of attention today, and seems to have a relatively interesting solution.

Humans of New York is a fashion photography blog run by Brandon Stanton. He was approached by DKNY with an offer to use some of his images in their store windows around the world. They couldn’t agree on a fair price and the deal fell through. That’s when things go bad in this story.

Despite not having a deal, the images went up in the windows anyway. Stanton took to his Facebook page where he has over 550,000 likes and asked for help getting a response out of DKNY, suggesting they donate $100,000 to a Brooklyn YMCA as penance for their IP sins.

This morning, DKNY responded on their own Facebook page, admitting that they used the images without permission, claiming that the offending stores were using early mock-ups that were only meant to be used internally. They have also pledged to donate $25,000 to the YMCA mentioned above.

It’s always bad news when something like this happens, but it’s a bit refreshing to see a company admit to wrongdoing and try to make it right, even if they’re still chalking it up to an error (which may very well be the case).

Next time someone steals your images, here’s what you should do.