Want to see an equally adorable and terrifying encounter between snowmen and group of tigers? 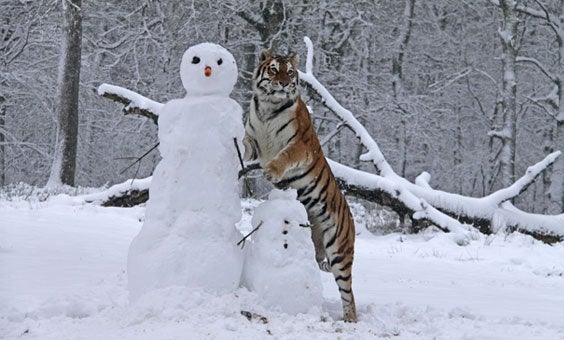 England is currently in the grip of a rare snowstorm, which has devastated much of the country’s transportation networks. However, not everything about the unusual weather is horrible, as this delightful video shows. Longleat Safari Park in Wiltshire decided to build a few snowmen for their tigers to play with, and put in cameras to record the interaction.

The video itself is just a couple of minutes long, but it’s fantastic. It’s part adorable, as you see the tigers acting like enormous versions of a housecat, exploring and playing. And part pure horror, as you get to see a tiger’s jaw closing on a camera, and get far closer to a mauling than most of us would like.

The tigers weren’t the only animals enjoying the weather, Longleat has uploaded an incredible set of pictures of other critters exploring the white powdery stuff that falls from the sky. The red panda is far too adorable.

For something a bit less exotic, here’s a housecat having the same fun.