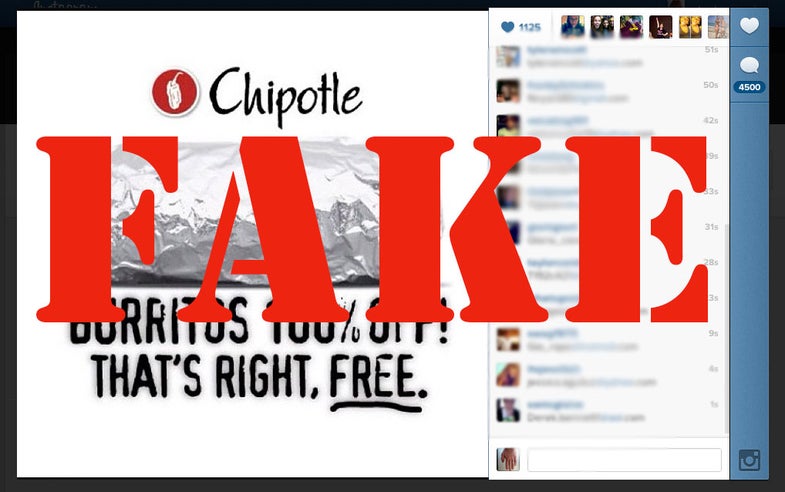 Having just released their web profiles feature, Instagram is growing faster than ever before, and with that comes a new influx of scams. Hooray for the internet.

The current trend is probably popping up in your Facebook feed right at this moment. Scammers are creating fake accounts to look like those of big brands. They’re then creating fake coupons or deals and asking users to follow, like, share, and even comment with their email addresses in order to claim the free stuff. Problem is, the free stuff doesn’t exist and you just end up giving away your personal info.

At its core, it’s basically phishing — a technique where scammers trick users by making fake websites or email addresses that look like they’re from a business or a bank. It’s an artform as old as e-mail. But, while most people seem to know not to bite when it hits their inbox, more people are falling for it over Instagram.

Often times, the accounts have URLs close to what they should be. The Chipotle one pictured above is @ChipotleUSA. Clever. Evil. I think part of the reason people are falling for it more often is that the photos also look official. That could totally be a Chipotle coupon or sign. And it likely was at one point. Now, instead of being used to distribute delicious free burritos, it’s being used to scrape data.

And the fact that they’re using photos, I think , lends even more credibility. You click on the fake Chipotle account and see some pictures of the stores. Even in a time when we’re so eager as a people to cry “Fake! Photoshop!” there’s still something to be said for seeing photos of something to make it seem more real.

While many of you are probably aware that this is happening, there are surely countless others who don’t. Need proof? Check out the number of comments on some of these scam posts. They’re in the thousands. Other popular scams pull the same thing with airlines. Those are even more popular.

It makes me wonder if Instagram will eventually implement some kind of more in-depth authentication system like Twitter’s verified user system. Until then, you’re probably better off being careful with your data rather than risking it for free stuff. You can also always email a company to see if a deal is for real. The bigger ones have whole departments designated for responding to inquiries like that.

In the mean time, you can follow us at Instagram. We can’t give you any free burritos, but we can promise no lunch pictures, no filters, and lots of cool pictures of interesting cameras.