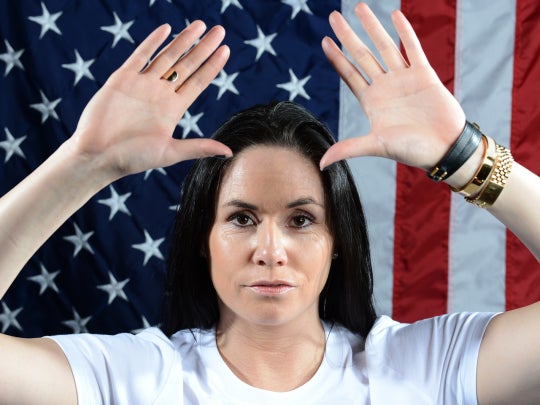 In May, the Olympic Committee held its Media Summit in Dallas, Texas, giving photographers access to the the Team USA athletes, and a chance to immortalize them in the build-up to the games. The photographers were each given a small spot where they could shoot the athletes, and were allowed to pose and alter the lighting to their hearts contents. Some of the photographs are excellent, but the work of one photographer has the internet in an uproar.

Joe Klamar’s work for Getty/AFP has been put up on CBS and the internet reaction has not been favorable. Klamar’s work has been called out for its awkward posing, inexperienced use of lighting, lacking composition, and been unfavorably compared to that of a high schooler. Some of the shots aren’t bad at all, but for every good one, there’s one like this…or this…or this.

That’s not to say Klamar is a bad photographer, but it sounds like he’s primarily a man who shoots galas and press conferences, and so may not have been the best person to send to a portrait session for dozens of athletes in quick succession. Without a background in strobistry and posing, that’s a hell of a daunting assignment. That still doesn’t account for the lack of any post-processing and touching up.

Some are arguing that the photographs are deliberately subversive, but I can’t help but feel that’s reaching. What do you think? Incompetent? Out of his element? Or pushing boundaries in how we see Olympians?