Making use of the iPhone's accelerometer and gyroscope, Rock Photographer combines photography with Guitar Hero. 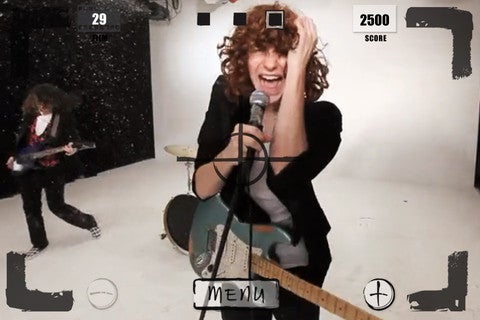 Rock Photographer is a newly released game for the iPhone which combines photography with controls similar to a first person shooter to put you in the world of a concert photographer. Created by Joey L and the team at All-Nighters, the game has a number of concerts, each of which you can look around while the band plays, and capture shots. If you time and frame the action just right, you get paid in-game cash for your photography skills.

To people who grew up playing video games, perhaps the most apt description is Rock Band meets Pokemon Snap, but if that makes no sense, you can watch the video below to get a feel for the title. The way the iPhone handles looking around a scene using its internal sensors has been used heavily in action and shooting games, but this marks the first time I’ve seen those same controls used for photography.

No, it’s not going to turn you into a highly paid rock photographer, but at the very least it might get you a feel for how to be looking at the right place at the right time.

Rock Photographer, the Game from Joey L on Vimeo.