Is The New iPad’s Ultra-High-Res Screen Trouble For Photographers?

Want your images to look their best on the new iPad? They'll have to be big enough for an 8"x10" print 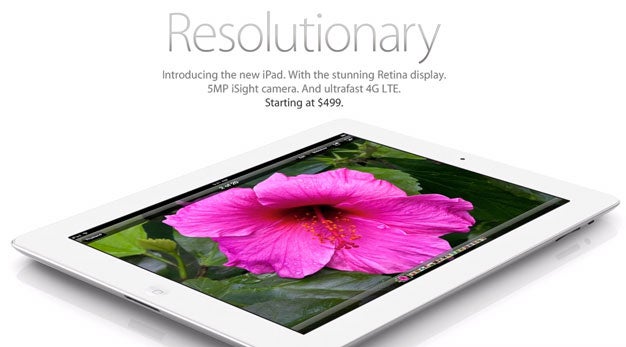 After months of rumors, Apple has just announced the new version of the iPad. It has a faster processor, a new camera on par with the one found in the iPhone 4s and a new screen with a resolution of 2048 x 1563. That’s a lot of pixels. Maybe even too many.

A 2048 x 1563 image is roughly 3.2-megapixels. As we all learned back in the days of the megapixel wars, that’s plenty of resolution to produce a more-than-acceptable 8″ x 10″ print. Even at 11″ x 14″, you’d likely get a more than acceptable result. And that’s how big you’re going to have to make your online images if you want them to look their best on the new iPad.

Once you’ve uploaded a full-resolution image, there’s really not much you can do to protect it. Even if photo sharing sites implement safe-guards, they’re still going to have a hard time blocking people from just taking screen shots of the ipad using the home and power buttons — 3.2 megapixel screenshots.

If you want to upload smaller images, your viewers will be left with two options. They can zoom in on the image and reduce its quality or simply look at it in a much smaller format. For viewers who are used to looking at full-res versions on their current iPad’s 1024 x 768 screen, that will likely be disappointing. Both options detract from the overall viewer experience, which is always bad.

If you have a lot of images already uploaded to photo sharing services, you’re likely going to be faced with another decision. Flickr’s large setting limits images to 1,000 pixels in each direction, meaning that looking at the large version will now only fill up a portion of the screen. That’s true for many HD monitors, but they’re often much larger than the iPad’s 9.7-inch screen, so viewing it is still fairly easy. Whether or not it’s worth it to go back and upload bigger is something to consider.

This new development will also likely be pretty tough on iPad publishers for some time as well. Current iPad magazines are optimized for the old screen, which means they’re only about 1/4 the resolution they need to be for new display. Adapting is going to significantly drive up the download size of any photo-heavy app, especially magazines. Plus, any full-page image in the magazine will now need to be the full 3.2-megapixels, something many photographers most likely won’t be too happy about.

It’s also worth noting that the upped resolution puts a bit of a hindrance on Adobe’s recent Photoshop Touch release. Their photo editing app caps image files at just 1600 x 1600 pixels. So, you won’t be able to produce images that fill up the whole iPad screen, which isn’t exactly ideal. Of course, Apple likely isn’t too sad about it, since they also announced their own photo editing iPad app, iPhoto.

It will be interesting to see how most shooters, as well as the photo sharing services, react. Recently, 500 PX began letting users offer computer desktop-sized image downloads for a price of $2.99 (with $.99 of that going to the site and the other $2 going to the photographer). I wouldn’t be surprised to see other services offering similar models, but until then, we’ll likely go through a bit of a sorting out phase.

How will you handle the resolution shift? Watermarks? Sticking with smaller images? Letting the high-res out and hoping for the best? Does the potential for beautifully-displayed offset the risk? Let us know via Twitter or Facebook.