Proposed “eye3” hexacopter would put a DSLR in the air for $999. 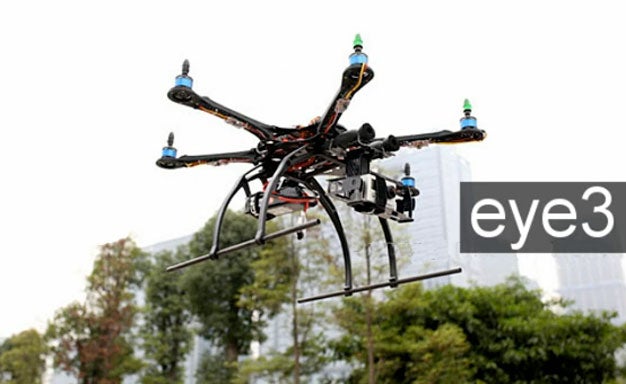 Created by aerial enthusiast Kellie Sigler and her robotics maker husband, the “eye3” is an unmanned aerial vehicle (UAV) that can be used without any special training. The six arm structure of the eye3 weighs four pounds and is made out of carbon and glass fibers, which offer strength without adding weight to the frame. Each arm is outfitted with a 350W motor capable of up to four pounds of vertical thrust, making a combined capability of 24 pounds of lift, more than enough to get a DSLR and lens into the air.

The eye3 uses open source software called APM Planner, which is autopilot software that allows you to use Google Maps to plot out the path of the UAV. The software takes care of the takeoff, flight path, and landing, and includes built-in auto-stabilization features.

The cost of the basic kit is $999, thousands less than any other flying robots, making aerial photography a possibility for hobbyists.

The Project will close on February 23rd, and anyone pledging $999 will get the basic kit, and $2,500 will guarantee you a full kit (including the transmitter and receiver).