If you usually hide behind your camera at Halloween parties, this year you might try hiding inside of one 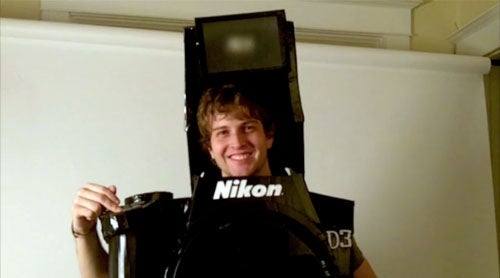 I don’t like to post a lot of cutesy, camera-shaped stuff here on PopPhoto.com — there are other sites out there if you’re into cakes and pillows that look like DSLRs. But, this fully-functioning DSLR costume is one of the coolest things I’ve seen in quite some time.

Card-carrying camera nerd Tyler Card built the body of his killer camera costume out of cardboard and a five gallon bucket. Then, he built a normal-sized Nikon DSLR and a flash into it, using a remote shutter cable so he can actually walk around taking pictures. Perhaps the coolest part is that the resulting images are then displayed on the back of the costume, using a hacked laptop LCD screen.

If you watch the making of video, you can see some of the resulting photos and they’re pretty fantastic. According to his Tumblr, it even has a wireless trigger inside so he can set off strobes. Now all he needs is a buddy dressed as a laptop with a huge, working version of Lightroom to let him process the images on the fly.

Thanks to his roomate, @adamichael on Twitter for the tip!

Making of the Camera Costume from Tyler Card on Vimeo.