Reuters Photo From Libya Accused of Being Digitally Altered 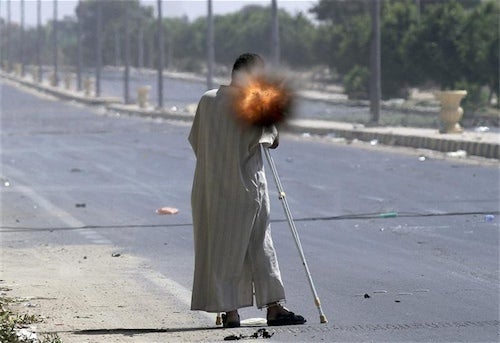 The photograph above was taken by Anis Mili for Reuters, accompanied by the caption “A rebel on crutches fires a rocket propelled grenade while fighting on the front line in Sirte September 24, 2011.” The timing on the photograph is remarkable, and Reuters put the image on their Editor’s Choice blog — except it’s not there anymore. A fierce discussion of the image started almost immediately, with many accusing the image of being digitally edited, and Reuters pulled the image. If you can’t even access the comments in the link above, there’s a Google cache which should give you some idea of the comments.

The primary thrust of the accusations is that the shadow of the man firing the weapon is far too narrow to account for the RPG he’s meant to be holding. There’s also the fact that the explosion doesn’t seem to be casting any light, and has oddly blurred edges. The angle of the man’s left arm seems low to be holding the RPG tube two-handed, but this could be due to having very baggy sleeves.

Reuters only response on the thread was confirming that a long lens was used to take the photo, saying:

You can see more of Mili’s work in Libya here, and he obviously has seen no shortage of rocket fire, and explosives never behave the way you think they will during photography — the artifacts that people cite as proof of editing could very well be just peculiarities of that firing. Also, the fact that Reuters has pulled the image isn’t, as some would suggest, proof that it has been digitally altered. It’s likely Reuters is just playing it safe while they investigate the situation.

We’ve reached out to Reuters for comment, and will update when we hear more. In the interim, the image is still up on a Reuters affiliated Twitter feed, so check it out and let us known in the comments if you think it’s legit or not.