Photographer Wants to Build a $270,000 Camera To Photograph a Lost Da Vinci Painting Through a Wall

Leonardo da Vinci's Battle of Anghiari has long been thought lost, but a very smart camera may be the key to finding it 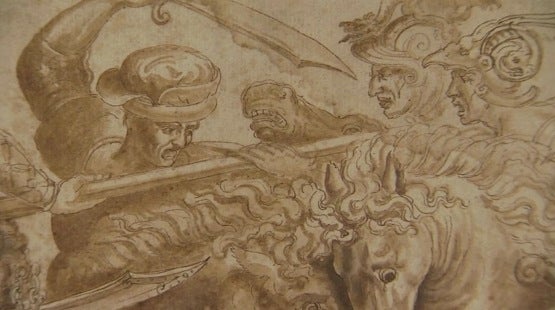 In one of the most ambitious Kickstarter projects we’ve ever seen, photographer Dave Yoder is attempting to raise an astonishing $266,500 to build a special camera — one capable of peering through five inches of plaster and brick and possibly finding a lost masterpiece of Leonardo da Vinci. Dan Brown would be proud.

In the early days of the 16th century, da Vinci started work on the _The Battle of Anghiari, _a work which we know about due to contemporary records and surviving sketches and preporatory work. Created in the Hall of Five Hundred (Salone dei Cinquecento) in the Palazzo Vecchio, Florence, it was da Vinci’s largest work, but abandoned due to problems with colors mixing while they dried. Some fifty years later, the building was expanded, and the fresco vanished, either destroyed, or more intriguingly, covered by newer work.

That’s where Yoder comes in. He’s been on assignment with National Geographic, working with an Italian art historian who thinks that the original da Vinci is preserved behind the newer piece, due to a gap between the original wall and the later one with the new painting. This gap isn’t present anywhere else in the building, and may mean that the painter of the new murals knew what was there, and secretly preserved it. The city council of Florence has okayed more research, but it can’t be at all destructive, so Yoder went searching for a physicist to help him photograph a rennaisance painting behind another painting, and with a brick wall in between.

He contacted Dr. Robert Smither, a senior physicist from Argonne National Laboratory’s Advanced Photon Source, who has worked on a gamma camera that might be able to detect the image — in their tests, it was able to register gamma ray signatures through the same bricks as are used on the Hall of Five Hundred. Now they just have to build the camera, and they need $266,500 to do it.

While partly funded by the National Geographic Society, Yoder still needs to raise more funds to build the gamma camera, and this funding will be used primarily to buy a portable particle accelerator and a germanium crystal detector for the rig.

And there’s still a possibility — however small — that the da Vinci isn’t even there. But without this research, there’s no way to know for sure.

If you’re interested in donating to help this project, jump over to the Kickstarter page, and keep in mind that all donations are tax deductible.