Not only did September 11, 2001 change the world forever, it changed photography forever 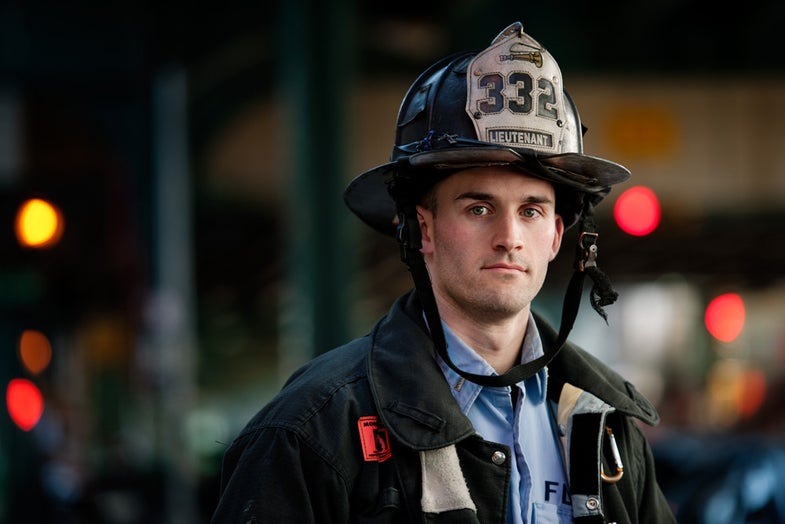 In his current exhibit, Joe reached out to many of the subjects from his original project, and re-photographed them a decade later. His new images, all shot with state-of-the-art photography equipment and lighting, are showcased next to the original Polaroid images. The contrast between images feels like it, in a sense, brings some closure to the deep wounds caused by September 11. It should also be noted that his new images exemplify not only how far photographic technology has come over the past decade, but how far the ability and expertise in creating an image, using and manipulating light, has come. There is a reason Joe is considered one of the best at what he does.

The Newseum 9/11 Gallery
Where: The Newseum, Washington D.C.
When: Permanent exhibit
More Info

This exhibit has been a permanent fixture at DCs Newseum for several years, showing off a vast and comprehensive collection of news-oriented September 11, 2001 images. The walls of the main exhibit area are completely covered from floor to ceiling with the front-pages of national and international newspapers from the day after the attacks.

In addition, the exhibit contains many of the very last images taken by photojournalist William Biggart, who was killed while covering the events. Also included in the exhibit are countless accounts, from many of the photojournalists whose images landed on page one of newspapers all around the world the following day.

Contained in this exhibit are 30 of the most iconic Associated Press images that came from the attacks. The AP collaborated with the New York City Police Museum to narrow down and curate the display.

The exhibit concentrates on those men and women in uniform who performed their duties bravely and courageously in the moments before, during and after the attacks. The timeline extends from the arrival of the first responders all the way through the cleaning process to make way for the new Freedom Tower.

The 9-11 Photographs
Who: John Botte
Where: The Morrison Hotel Gallery, New York City
When: September 4 to September 24
More Info

This exhibit contains a treasure-trove of never-before-seen images shot by life-long photographer and former NYPD detective, John Botte. In the days following the attacks, John had a unique opportunity, as a detective for the NYPD, to work with and photograph individuals as they worked through the rescue and recovery efforts in New York City.

His images were all shot on b/w film—which adds an especially powerful and beautiful quality to the body of work. It should also be noted that renowned photographer Timothy White curated the exhibit.

Witness to tragedy and Recovery
Who: Photojournalist, many of whom (including Todd Maisel, Allan Tannenbaum and David Handschuh) are featured in American Photo’s 9/11: The Photographers’ Stories

This exhibit kicks off September 8, 2011, with a panel discussion that includes photojournalists, videographers, psychologist and scholars, who will be discussing and analyzing how the images that came out of the 9/11 terrorist attacks have influenced the mindset of the public. There will also be a keynote address by CNNs Aaron Brown.

The exhibit itself features 140 photographs, taken by more than 30 photojournalists. Most of the photographers included are members of the NPPA, who shot for such publications as the New York Times, the Associated Press, the Star Ledger, Reuters, the New York Post, the Daily News and many more. The NPPA sponsored the event in conjunction with Pace University.

Twin Towers and the City
Who: Camilo Jose Vergara
Where: Museum of the City of New York
When: September 3 to December 4, 2011
More Info

For more than four decades, MacArthur-winning photographer, Camilo Jose Vergara photographed the World Trade Center, from their dramatic ascent as the crown jewel of the Manhattan skyline, to their tragic destruction. This exhibit presents the full history of the towers, and examines the importance of their place in both in the Manhattan skyline and in history.

While other exhibits offer to shed more light on the human aspects of September 11, 2001, Vergaras exhibit does something quite different; it concentrates on the towers themselves. The entire project is bookended with photographs of the NYC skyline before the towers were constructed and after they were gone.

My 9-11: One Man’s Journey through the Unexpected Events of September 11, 2011
Who: Richard Agudelo
Where: Charles West Gallery, New York City
When:
More Info

Richard Agudelo shot just three rolls of film during the first 72-hours after the September 11th attacks, but he exposed all of them at Ground Zero, surrounded by first responders. The idea to create a book of the images and show them off as part of an exhibit stemmed from his time spent at the World Trade Center Health Organization, which is dedicated to people affected by the tragedy.

The resulting project is a collection of photos as well as a soundtrack recorded by inspired recording artists. Proceeds from the book go to benefit first responder charities.

The original project behind this exhibit started in a completely organic way. As the overview explains, it started with a single flea market photograph put up in a SoHo window. From there, it grew into a full-on photography show, featuring images from photographic artists of all kinds from journalists to tourists.

The updated edition is a collection of about 300 photos, selected from more than 5,000 submissions, each attempting to harness the impact of one of the country’s most significant events.

Proceeds from the first show amounted to more than a million dollars given to the Children’s Aid Society.

Getting photographs of Ground Zero in the days immediately following September 11 was nearly impossible. But, by developing relationships with many of the first responders, photographer Joel Meyerowitz was able to get insane access to tear-down and rebuilding process. So good was his access that he was actually approached by the Museum of the City of New York, after which he created the 9/11 Photographic Archive.

He took more than 8,000 photographs, 400 of which appeared in his book Aftermath: World Trade Center Archive.