A renowned filmmaker looking for inspiration in still photography 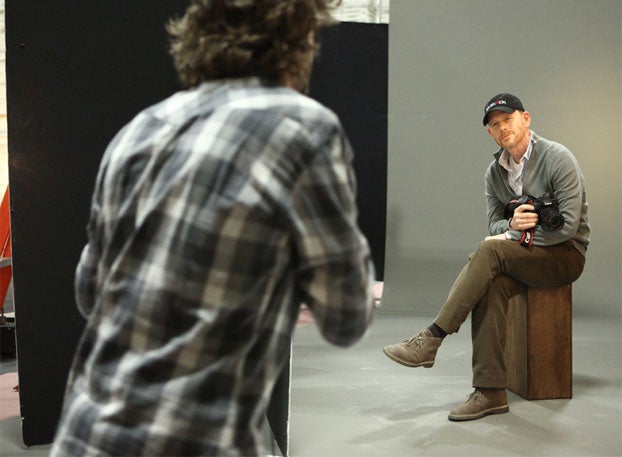 As part of the Project Imagin8ion campaign, Canon tapped director Ron Howard to be its official judge. The eight winning images he picks will be used as the inspiration for a short film directed by his daughter, Bryce Howard. We got a chance to talk to the Apollo 13 directer (and Arrested Development narrator) about his involvement and his long-standing relationship with images of all kinds.

PopPhoto.com: How did you end up getting involved with Project Imagin8ion?

Ron Howard: Canon developed the concept of using images to inspire a short film. I liked the idea immediately. Creatively it reminded me of an exercise that I do when I’m talking on the phone. Instead of doing a random doodle, I like to do three lines on a piece of paper and connect them and color it in. Some turn out to be interesting and some don’t make sense at all. It’s a great, simple creative exercise that can actually be very challening.

**There are already thousands of submitted images, what kind of images are you going to be looking for during the judging? **

Our first session of looking at photos is happening this weekend. We’ve been clicking around, talking about how we think we’re going to approach it. We’ll be looking at the finalists based partially on the user voting. We want to choose the most stirring images. We have to find some kind of a thread between the categories that suggests a narrative. We don’t want to make the simplest choice. I want to choose the images that really speak to me.

**Is there a specific type of photograph that usually resonates with you? **

There’s always some kind of intangible quality that makes a photograph really reach me. There are landscapes that I find really compelling and there are street scenes and portraits, too. I don’t think I have a predilection toward one genre or another.

This project clearly seems to imply that the relationship between moving pictures and still photography has changed quite a bit with the introduction of HDSLRs. How have things changed from your point of view?

I think that filmmakers have always taken inspiration from still images. What’s interesting is that now you can put out the word that you’re looking for photographs and pretty soon you have 69,000 of them to consider. People are shooting more pictures and, whether they’re aware of it or not, they’re developing they’re own style. Whether they’re using a cell phone or carefully composing with good equipment, they’re looking back and evaluating what makes a picture stand out to them. People don’t even realize that they’re developing an aesthetic, but they are because they’re so free to shoot. It’s influencing film-making, too. What kind of composition do we find ourselves seeing over and over again?

Have you done much still photography on your own?

I always have. I’m very much an amateur when it comes to still photography. Early in my career as a director, I realized that I had a good sense of story and related well to the actors. But, visually, I didn’t have the command I needed. I consciously went out and started shooting more. I was constantly evaluating my work [and it] helped a lot in developing a style. Digital photography has made it much easier. I like the fact that I can put photos on my computer and manipulate them to see how it changes the texture or the tone.

Has the work of any particular photographer really had an effect on you?

I’ve had my portrait taken by Annie Leibovitz a couple times over the years. I don’t know quite how she does it. She was the only photographer allowed to go up and shoot weightless with us on Apollo 13. She’s able to get something interesting very quickly. I tried to talk to her about it and she really can’t put it into words, either. She can link the way she wants to compose the shot, the lighting and the environment to her subject in a brilliant way. It’s her genius. A lot of it is preparation. She thinks about her subject for a long time. It winds up reflecting something really meaningful.