The new iPhone app Gigwalk has everyone talking because they're promising to pay you for running around town, snapping shots of streets. 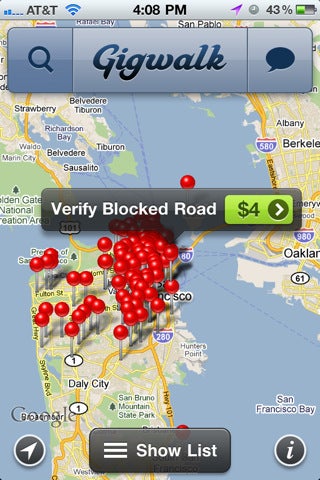 Gigwalk is a free iPhone app which seems to take the spirit of Amazon’s Mechanical Turk and apply it to photography. It’s a free app to download, and at its most basic level, you sign up to take some specific photographs around your city, and you get paid. The cash ain’t great, early reports indicate that most of the jobs run the $2-$20 range, depending on how much effort they take, but the service is already set up in seven cities (LA, New York, Boston, San Francisco, Philadelphia, Chicago and South Florida), and paying out its users. As you do work, you simultaneously earn “street cred” which scores you better paying and more interesting gigs.

The photography the app wants varies depending on the clients. According to TechCrunch, one of the early sponsors is TomTom, who are using this vast army of street photographers to check for changes in street layouts, blocked roads, illegal turns, and that sort of thing. As it stands, anyone can post a gig (for a fee) so I’m suddenly struck by the possibility of TMZ putting out bounties on celebrities out having lunch.

There is one other facet which might be a little worrying: if you look at the description of the sign up process, they want a fair amount of information from you in order to set up the account: DOB, occupation, employer, and education level. To me, this screams data harvesting. With this info they can start crunching what sort of people go to which places, and sell that information on if they wanted to. There’s nothing to suggest that they plan to do it, but there’s also nothing stopping them from doing so. Take that for what you will.

User reviews of the app seem mostly positive, with the one big complaint from users is how few cities it’s available in. While it won’t earn you enough to replace a full time job, your iPhone is already always in your pocket, ready to take a photo, and this could definitely help you scrape together a little more cash for that lens you’ve been eyeing up — assuming you don’t mind doing grunt work for an unknown company, and potentially having your personal info passed on.