These pictures snapped by shooter proved to be the first scientific evidence that great blue herons are able to eat stingrays — barb and all. 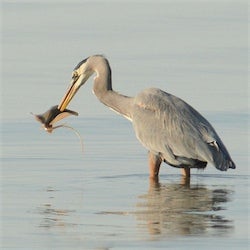 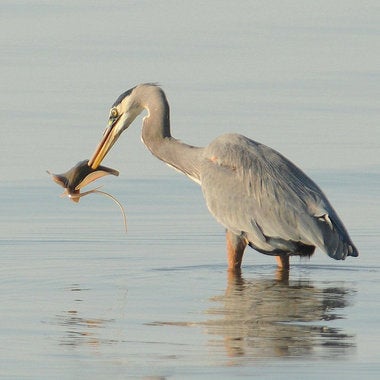 We don’t cover a lot of news about herons, or even stingrays here on PopPhoto.com. But being in the right place at the right time scored Alabaman Danny Dolan a frame that scientists find fascinating. The shot depicts a great blue heron feeding on a stingray, something that has likely never been captured before. In 2009, Dolan was walking around the Mississippi Sound when he saw the bird, says al.com, and he started shooting. He took more than 200 photographs as he documented the process:

It took the bird four attempts to swallow the ray, eventually eating it whole — venomous stinger included. He showed the picture to the Dauphin Island Sea Labs, and they couldn’t find any other evidence of herons eating the stingrays — so they wrote it up for an academic article. Now Dolan’s co-author of a just published research article called “First Evidence of Elasmobranch Predation by a Waterbird: Stingray Attack and Consumption by the Great Blue Heron (Ardea hernias)” in the journal Waterbirds.

You can see more of Dolan’s photos at the video on al.com.

Ultimately, this acts as a great reminder that you don’t have to be a pro on assignment to get great and meaningul images. Keep shooting.