And it’s available in the US! (but currently sold out) 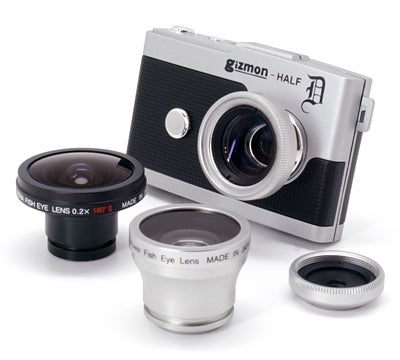 Tiny spy cameras seem to be all the rage these days. A few weeks ago we blogged the CHOMBi Cam One, the world’s tiniest DSLR—and while it was pretty cool, its major drawback was that it would not be available directly in the US. Now Gizmon has released a similar palm-sized camera in the form of the Gizmon Half D.

Made to look like a miniature version of the Olympus PEN F 35mm film camera, this pint-sized doppelganger features a 2MP sensor, a 1.5-inch LCD and ISO’s ranging from 100-400. It is also capable of VGA video capture and features 10 different color modes. Just throw a micro SD card in it and you’re good to go.

However, probably the coolest feature of the Gizmon Half D, like the CHOMBi Cam One, is its ability to use different miniature lenses. The Gizmon Half D is available through the Gizmon Store for $120, but unfortunately is currently sold out.