These wallet-pleasing cameras will all run you well under $200. 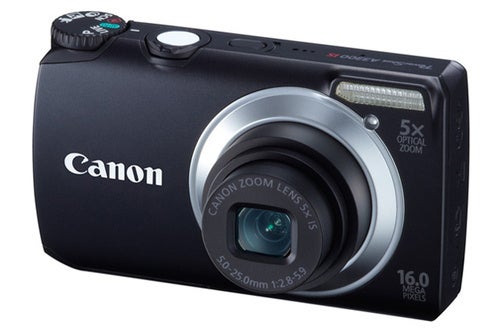 Las Vegas- The word of the day for Canon is: Budget. No flashy new DSLR’s to show off at this year’s CES trade show, just a few stripped down compacts that feature basic controls, HD video capture (except on the A800) and art filters galore. The A-series of cameras (as they are appropriately being called) include the Powershot A3300 IS, A2200, A1200 and A800.

The A3300 IS, A220 and A1200 all feature 720p video capture, advanced Smart Auto modes with subject detection, Bur Reduction, and creative filters including: Toy Camera, Super Vivid, Fish-eye, Poster, Miniature and Monochrome mode. All three cameras also include a nifty “Discreet Mode,” that turns off the sound, auto-focus assist beam and flash so as to not disturb one’s subject, like, say a sleeping child or grandparent.

The A1200, which is clearly marketed toward older folks and those with larger-than-average hands, features both exaggerated buttons and a bright optical viewfinder to help make shooting easier. It also features a 12.1MP CCD sensor, a 2.7” LCD and 4x optical zoom (28-112mm 35mm equivalent). It will be available in early March for $109.99.