The Aoyama Tree is a living monument to Buddhism in Los Angeles. 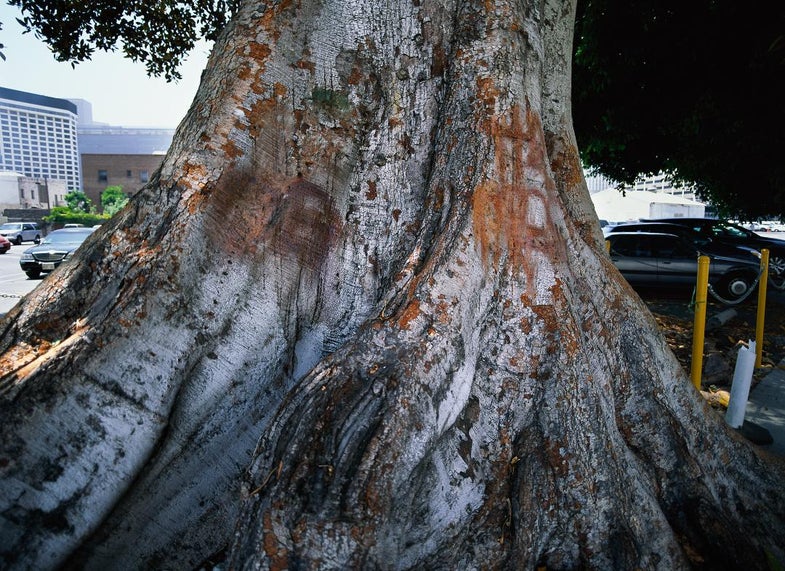 THE FIG TREE
** **The Trees: The Aoyama Tree, a Moreton Bay fig growing in a Los Angeles parking lot
The Threat: THE lack of water and nutrients due to asphalt paving; overpruning Read more about Robert Glenn Ketchum’s photos. Robert Glenn Ketchum
SHARE

One of only five photographers ever featured in American Photo magazine’s “Master” series, Ketchum is one of the most influential voices in the American conservation movement. His most recent campaign aims to prevent the destruction of Southwest Alaska’s fisheries by exploitation of the area’s mineral resources

Many photographers use their work to make a political statement. Most of them leave it at that, passively hoping their pictures will simply inspire the human race to change its harmful ways. But few photographers use the medium in such a political way as Robert Glenn Ketchum. Through a series of books and exhibitions, Ketchum has put his artful images at the service of an ambitious environmental agenda—helping push important conservation laws through Congress.

Unlike most nature photographers, Ketchum can measure the effectiveness of his work in acres saved. Indeed, it has been used to support successful conservation campaigns ranging from the preservation of New York’s Hudson River Highlands to the protection of Alaska’s Tongass Rainforest from logging—in the latter case, compelling Congress to set aside over a million acres of old-growth trees. For Every Tree Tells a Story, though, Ketchum focused his attention on a single specimen. A 50-foot-tall Moreton Bay fig (Ficus macrophylla), the Aoyama Tree was planted in 1920 by its namesake, a Buddhist priest in the Little Tokyo neighborhood of Los Angeles, at the gates of the first Koyasan Buddhist Temple, one of the earliest in the city. It is a symbol of the long and sometimes difficult history of L.A.’s Japanese-American community. Over the years, though, it has been increasingly boxed in by the parking lot required for surrounding buildings, including, ironically, the Japanese American National Museum.

Layers of asphalt now deprive the Aoyama Tree’s roots of water and nutrients, and though a chain surrounds its base it remains unprotected from the scrawls of passing vandals. Ketchum reports that the tree has also been cut back to make it less of a hazard to cars and buildings. “You can see that its branches have been pruned heavily, and not always well,” he says. “Its crown is smaller, relative to its broad trunk, than it would have been in nature.” That disproportion is why Ketchum concentrated on the trunk. “When you back up, the tree gets lost in the large buildings surrounding it.”

The symbolism is lost as well. It’s paradoxical that a tree planted as a spiritual marker receives so little apparent reverence itself. It’s as if they paved paradise, to quote the songwriter Joni Mitchell, and put up a parking lot. Perhaps a few of those parking spaces can be torn up by wise city fathers, so that the Aoyama Tree gets the space it deserves and the long drink it needs.