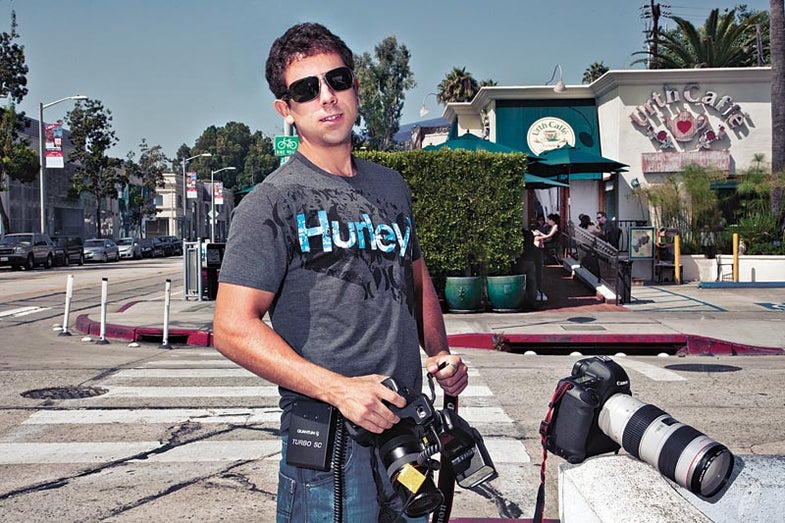 What’s a paparazzo’s day like?
It’s a lot of time in a car or standing on a sidewalk, waiting for a celebrity to come out of the house or out of a restaurant.

How did you get started?
You have to know someone who can show you what to do and get you in at an agency. Four years ago, my cousin was at an agency, X-17, and invited me to work with him. I didn’t have photo experience, but I taught myself everything in a few months.

How do you know where to shoot?
By exchanging stories with other photographers. If you call them with tips, they’ll call you, too. With bigger stories, photographers can be more competitive. I keep up to date on what’s going on with celebrities by checking websites each night.

Where do you sell your photos
I get assignments from the different agencies that I work for. If I know a big story is happening—like Lindsay Lohan getting out of rehab—then I just go shoot.

What’s your biggest story?
The most I’ve ever earned was when Kate Hudson went house-hunting with A-Rod and his kids.

Are you ever starstruck?
No, but some celebrities are really nice—Jessica Simpson and her whole family, and Pete Wentz. Others, like Jake Gyllenhaal and Leonardo DiCaprio, aren’t very nice to the photographers.

What if they want some privacy?
Most paparazzi will leave them alone if they ask nicely not to be photographed some times, then give good shots other times.

Have you ever been threatened?
No. I do mostly “old school” paparazzi photos, shooting from a distance so that celebrities don’t know they’re being photographed. It makes a more natural picture, and it’s more respectful. Getting in people’s faces gives paparazzi a bad name.

What about public opinion?
People who speak badly about the paparazzi also buy the magazines, and ask me on the street who I’m waiting for so they can get a look. Who doesn’t want to know about Jennifer Aniston’s new boyfriend? They talk badly about us because they’re jealous.