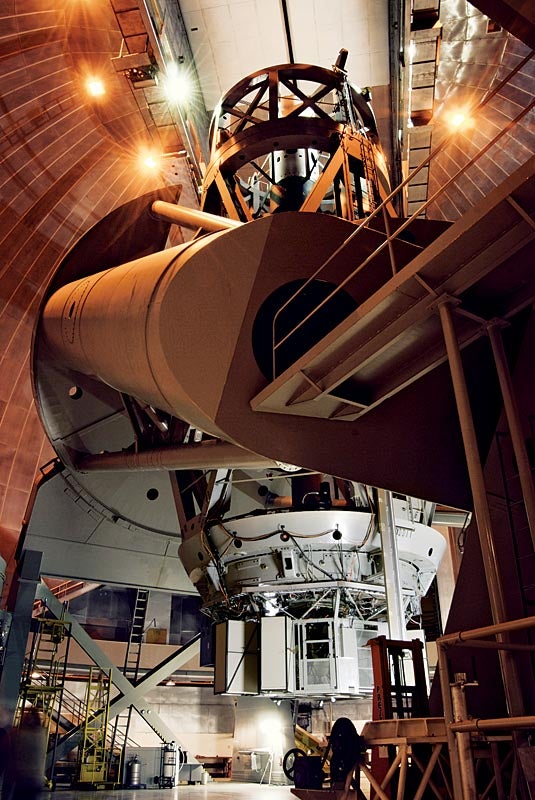 First visited Hale Telescope at Palomar Observatory in Southern California about 30 years ago. For decades it was the largest telescope of its kind—its 200-inch mirror and f/3.3 aperture gave it four times the light-collecting area of the next-largest telescope when it went up in 1948. When I first visited, they were still using analog technology, and there were no computer systems yet. It just blew my mind how smoothly everything worked.

My wife’s uncle, a scientist, has been working at Palomar for about 30 years. He does a lot of maintenance and troubleshooting, and so one day he was able to give our family a private tour. Some visitors from Cal Tech were scheduled to observe that evening, but we had five hours with the building all to ourselves.

After visiting the lower area and the structure that holds the telescope, we went up to the dome. My uncle-in-law showed the rest of my family how the machinery worked, and I went off on my own to shoot.

This was my first chance to photograph the telescope without other visitors in the background, and I wanted to get an image that really took it in and gave you a sense of its size. I spent about an hour shooting with my Nikon D80 and 18–55mm kit lens on a tripod, from all different angles. I was just using the ambient light, so it was all long exposures. I probably took about 500 shots, but this angle pretty much did it—it conveys the sheer enormity of the mechanics.

You can go there on tours, sometimes at night, and see the photos taken through the telescope. It’s a amazing piece of machinery, and worth visiting. See more at istockphoto.com/rappensuncle.