If the new Sigma 8-16mm zoom we saw back at PMA isn’t wide enough to satisfy your lust for going... 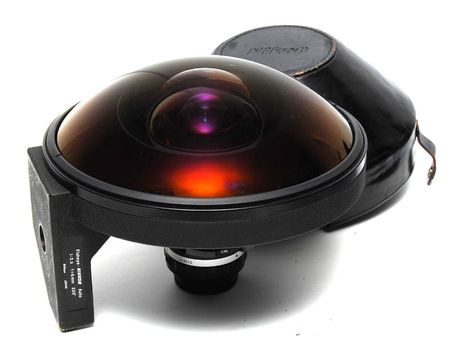 If the new Sigma 8-16mm zoom we saw back at PMA isn’t wide enough to satisfy your lust for going wide, it might me time to hit up the bank for a home equity loan and pick up this wonderfully freakish piece of Nikon glass currently on eBay. The lens covers a 220-degree field and weighs approximately 11-pounds. Inside, there are 12 elements in nine groups, the outermost of which sticks out well-past the lens barrel.

Sadly, we haven’t been able to track down any sample images from the lens, but we’ll keep trying, in part because we want to show them to you, but mostly because we’re pretty curious. But, since it was only made available by special order and was originally intended mostly for commercial and industrial use, there certainly aren’t many of these kicking around out there.