How To: Use a Ring Light Adapter

Prized by fashion pros, now ring lights are for everyone. 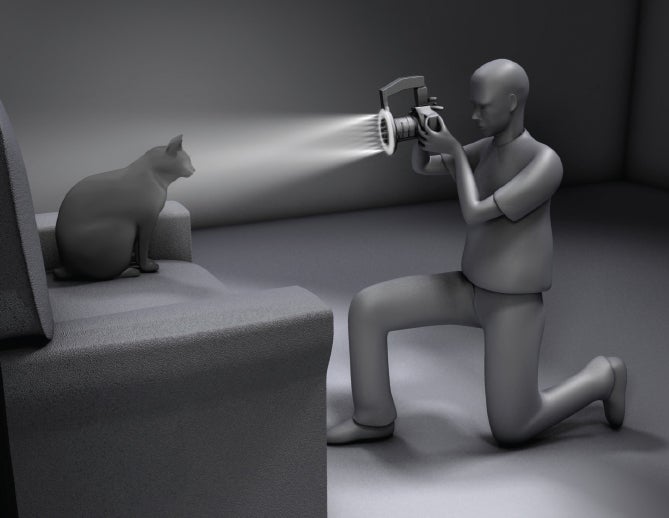 For a sharply etched subject with an electrifying catchlight in the eye, no light source you can find beats a ring flash.

These camera accessories mount around the lens and come in two sizes. Macro units have small flash tubes like those in shoe-mount flashes, with a diameter not much larger than the lens. They’re used almost exclusively for extreme closeups. Larger ring lights have interchangeable flash tubes—typical of studio strobes—and are much brighter, allowing you to shoot at a distance of feet instead of inches. They’re typically used for portrait and fashion photography.

But you can also use a large ring flash for close-ups, as Dan Tentler did for this arresting photo of his cat Aurora’s eye. The 29-year-old freelance internet security consultant and avid photographer (www.lightbending.net and flickr.com/vissago) has taken advantage of new products that make ring flash more affordable.

Until recently, larger ring lights could cost thousands of dollars, but that’s changing. Products such as the Bowens Ringlite Converter ($350, street) and Orbis ring flash attachment ($200, street) let you transform a studio strobe or hot-shoe flash into a ring light for much less. The Ray Flash adapter from ExpoImaging, which Tentler used for the photo here, also costs $200 (street).

Why a ring flash? It throws virtually no shadows on your subject (which helps eliminate wrinkles), and can cast a distinctive, aura-like shadow on a wall immediately behind your subject. It also throws a very cool circular catchlight in the eye, which appears quite large if the light is near enough to the subject.

But a ring flash can be less than flattering. Because its light is direct and harsh, it’s unforgiving of imperfect complexions— tricky for portraits, but not really a problem for a cat.

Want to take a similar shot? Here’s the rest of Tentler’s setup.

The Model: With a black or white cat, the correct exposure for the eye would almost certainly over- or underexpose the surrounding fur. Stick with midtone toroiseshells, calicos, and breeds such as Russian blues and Siamese. Also, you may only have one chance to get the shot, so set up everything perfectly before you fire. “My cat hates the ring light,” says Tentler. “When she sees it, she runs!” (Don’t worry, we checked with an opthalmologist: A flash used occasionally at these distances won’t harm your pet’s retina.)

The Lens: A macro lens that focuses as close as possible so that the eye’s circular catchlight appears large. Tentler focused his 105mm f/2.8 VR Micro-Nikkor (on a Nikon D300) to 12 inches— perfect for reproducing that supersized catchlight.

The Light: A macro ring light would have worked here, but its reflection (at a 12-inch working distance) would have been tiny, not dramatic.