DIY: Fisheye lens from a soda can and peep hole

There are plenty of specialty (or as some would say, “novelty”) cameras out there for you to purchase, but an... 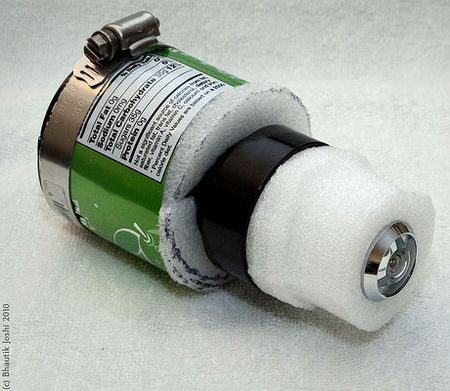 There are plenty of specialty (or as some would say, “novelty”) cameras out there for you to purchase, but an engineer at the special effects powerhouse, Industrial Light and Magic, has come up with a way to make $12 (roughly) worth of parts and even some trash and turn it into a quirky little fisheye. The optics come from a peep hole like you’d find in an apartment door and a lens from a film projector. It’s held together with foam donuts and a piece of a soda can and mounted using an adapter purchased on eBay for a pittance.

The concept is nothing all that revolutionary, but the resulting images have a very distinct style, much like something you’d expect to get out of a toy camera. We’re total suckers for these kinds of DIY projects, but if you’re not interested in doing any crafting, you could always use our tutorial and get yourself a fake, rounded fisheye effect. Anyone out there tried this themselves? Post links in the comments. We would love to see them.