Olympus has been doing the rugged compact thing for a while and now they have two new offerings for users... 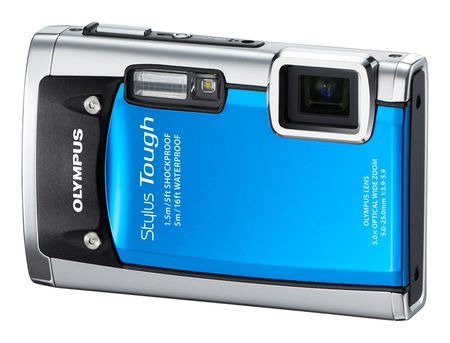 Olympus has been doing the rugged compact thing for a while and now they have two new offerings for users to use and abuse. The tougher of the two, the $400 Tough-8010, has been tested to withstand drops of up to 6.6 feet, 220 pounds of crushing force, 33-feet of water and temperatures as low as 14-degrees F. The $300 Tough-6020 isn’t quite as rugged, maxing out at 5-foot drops, and 16-feet of water.

Functionally, the two are extremely similar with both cams sporting 14-megapixel sensors, 5x optical zoom (28-140mm equivalent) and 2.7-inch LCD displays with 230,000 dots of resolution. Like the SP-series super-zooms that were also announced today, the new Tough cams use the TruePic III Image Processor and are packed with 29 shooting modes, including the intelligent auto and HD movie mode (720p). One of the cooler features is the LED Illuminator on the front of the camera, which can be used as a flashlight or for lighting up underwater scenes, which are notoriously dark. Plus, the Smart Charging feature lets you charge the camera using your computer’s USB ports.

Both cameras will be available later this month. Take the jump for the full feature list and more photos.