It’s hard to believe that we’re already upon the third generation of Olympus’s Micro Four Thirds PEN line, but the... 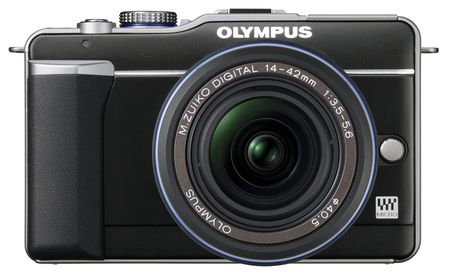 It’s hard to believe that we’re already upon the third generation of Olympus’s Micro Four Thirds PEN line, but the E-PL1 is official and it comes toting some serious upgrades. The most obvious improvement comes in the form of an integrated pop-up flash, something users have been asking for since generation one. Inside is a 12.3-megapixel Live MOS image sensor, as well as in-body image stabilization and a Sonic Wave Filter to reduce dust. Plus, there’s a dedicated video record button on the back for activating its HD video capture mode. In addition to the performance enhancements, they also somehow found a way to whack $200 off from the price of the E-P1, putting the sticker at ust $599 with an M. ZUIKO DIGITAL ED 14-42mm f3.5/5.6 Zoom Lens. That’s getting dangerously close to the territory currently ruled by high-end compacts.

No matter which PEN camera you have, you’ll soon have two new lens options in the form of the wide angle ED 9-18mm F4.0-5.6 (35mm equivalent 18-36mm) and the long-zooming M.ZUIKO DIGITAL ED 14-150mm F4.0-5.6 (35mm equivalent 28-300mm). Both are made from extra-low dispersion glass and will work with any of the Micro Four Thirds cams from Olympus. The 9-18mm lens is just 49mm (just under two-inches) long. The press material claims that both new lenses offer quieter, and more importantly, more responsive AF performance, something at which the PEN cams haven’t exactly excelled. Both will be available in early May with the 9-18mm and the 14-150mm lenses costing $700 and $600, respectively.

Full specs and lots of images after the jump, including some shots of the swanky new body colors: Black, Champagne Gold and Slate Blue.