At a quick glance, Fujifilmll be sucked up by a 10-megapixel Back Side Illumination CMOS sensor, which is capable of capturing 10 fps at max resolution. 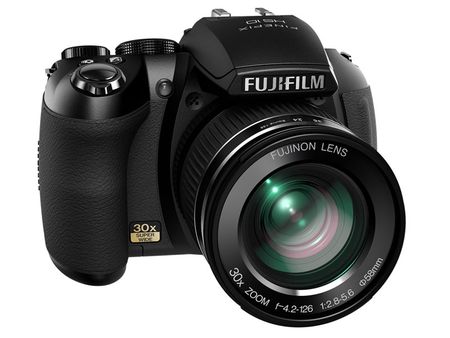 At a quick glance, Fujifilm’s new super-zoom could pass for a compact DSLR. But, the 30x Fujinon zoom lens is firmly attached to the body, offering up a 35mm equivalent range of 24-720mm. That’s 4mm wider than the 30x SP-800UZ we saw from Olympus. Zooming is handled by twisting a ring on the lens barrel, making the experience even more similar to that of a DSLR. Handling the image stabilization, you’ll find sensor shift IS as well as Digital IS and a max ISO of 6400. Once the light moves through the glass, it’ll be sucked up by a 10-megapixel Back Side Illumination CMOS sensor, which is capable of capturing 10 fps at max resolution.

The HD video mode captures full 1080p HD footage at 30 fps with stereo sound. Flip it into Super High Speed movie mode and it can grab super slo-mo footage at up to 1000 fps. The press material claims that the BSI CMOS sensor results in a 200% increase in sensitivity over a standard CMOS, making for better low-light performance and faster AF. The display is a 230,000 dot, 3-inch LCD that tilts.

The HS10 will be available in April for a street price of $499. Full specs and a picture of the back of the camera after the jump.