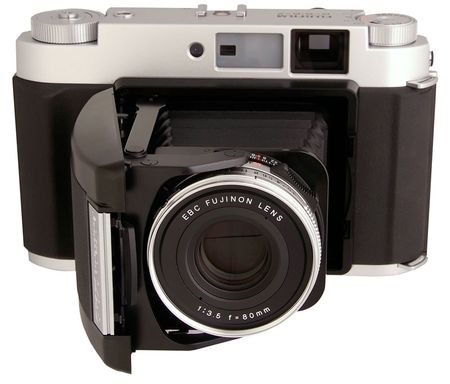 Film camera introductions usually don’t surprise us-a good part of the world still shoots film, after all-but here’s one that might as well have landed in a timeship from the past. The Fujifilm GF670 Professional is a folding medium-format camera-a type of camera whose heyday was the 1930’s. This 21st century version makes 6x7cm (2 ¼ x 2 ¾ inch) exposures on 120 or 220 rollfilm, and the fixed 80mm EBC Fujinon focuses manually via a coupled optical rangefinder. Exposure is either manual or aperture-priority auto via an electronically timed leaf shutter with speeds of 4 to 1/500 sec plus Bulb, and +/- 2 EV exposure compensation can be dialed in. The camera has both a hotshoe and PC terminal (remember PC terminals?) and flash can synchronize at any shutter speed. Weighing a little over 2 pounds and folding 2 ½ inches flat, the GF670 makes for a very portable package.

But why this camera, now? “There is a segment of studio, portrait, and landscape photographers who find that medium-format film is the perfect solution for their businesses because of the unique look that film offers as well as the ability to produce high-resolution photos in very large sizes” said a Fujifilm spokesperson. “Many photographers still have a passion for the art of traditional film photography.”

Those attending the Photo Marketing Association trade show in Anaheim Feb. 21-23 will be able to get their mitts on this contemporary classic, and it’s planned to ship in the second quarter of this year. Estimated price will be $2,199. -Dan Richards