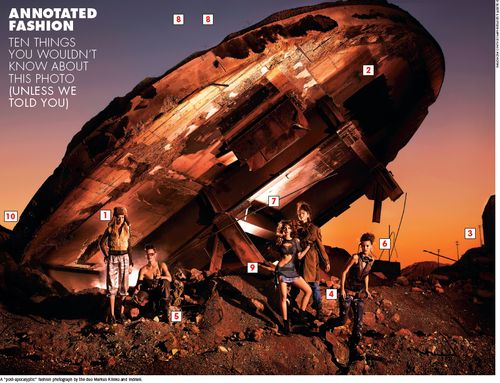 Photographic team Markus Klinko and Indrani made the image here in 2006 for V magazine, which invited a number of noted photographers to shoot their own interpretations of a V cover. “Mostly, I love it because when we were shooting it we had no idea if we were getting anything good,” says Klinko, the half of the team who takes the pictures. For Indrani, who helps create the mise-en-scène for the team’s images and does post-production work, the photo “brings back memories of happy chaos.” Sometimes, that is the recipe for creativity.

“The idea was to visualize a post-apocalyptic world where young people reassert their individuality by putting together pieces of clothing and making it chic,” says Indrani. “It really came together when we saw the location we were shooting at.”