This Month in History: June 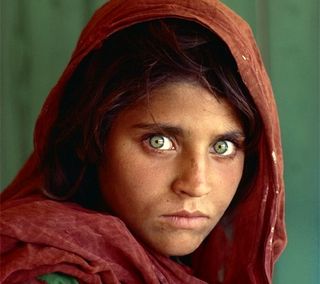 National Geographic’s cover photograph of a young Afghan refugee girl with striking eyes staring out from under a loose, red scarf has arguably become the magazine’s most recognized photo ever. The girl’s eyes, accurately described by the magazine as haunting, convey the plight of Afghanistan’s refugees.

The famous photo, taken by Steve McCurry, ran on the cover of National Geographic’s June 1985 issue. He used a Nikon FM2 and Kodachrome film.

McCurry unsuccessfully tried to track down his subject, now known as “the Afghan girl,” various times. Seventeen years after taking the famous photo, he was able to find her with the help of National Geographic Television & Film’s EXPLORER.

After the Soviets bombed her village, killing her parents and destroying her home, Sharbat Gula fled to the Pakistan refugee camp where she was photographed. She had been no more than 13 years old at the time, and she remembered the moment vividly– it was the only time she had ever been photographed. Read more about Gula’s life at National Geographic, where you can also view pictures of the journey to find her.