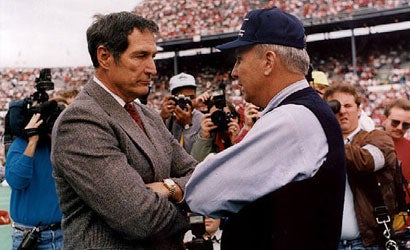 Sports photography: To me, it’s always been the essence of photojournalism. Nothing set up, nothing preplanned. You just go out there and shoot it. Sports photography is one of those fields that you either love or hate, and you’re either good at it or your not. There’s no gray line.

Working at some newspapers, one of my biggest concerns was covering youth sports events. It’s not that shooting little kids playing sports is a bad thing-it’s dealing with the parents and people who run the leagues. I’ve had directors of Little League games tell me that I had to sit on the rooftop of a dugout, wearing a hard hat, because of “liability concerns.” Guess who didn’t get any photos in the next day’s paper? Some parents will stop you on the sideline of a football game and yell at you simply because their child wasn’t featured in the previous game’s write-up. My absolute favorite are those who stop you and ask, “What T.V. station do you work for?” I’ll tell all of you, right here and now, that if you ever witness me acting like this at my kid’s sporting events, you have my permission to shoot me on the spot.

I’ll never forget the first “Big” sports event that I went to-a spring training game in Winter Haven, FL. That day, it was the Boston Red Sox and the Los Angeles Dodgers. I was 17-years-old and totally mesmerized by Tommy Lasorda, who, it turned out, was quite the entertainer that day-getting out of the dugout and talking to the crowd between innings. To me, it was what baseball should be: full contact with the crowd, casual and fun.

At that time, the Red Sox had an older guy who was pretty crusty around the edges shooting for them. He’d simply grunt when you asked him something, and one day he and I were the lone shooters on the first base side of the field. Wade Boggs was at the plate and I’d been instructed to get some nice shots of Boggs batting. First pitch…click Second pitch…click. Third pitch…click. The old guy turned at me and said, “Who the hell are you?” It caught me off guard to have someone ask me something like this in that kind of tone. I told him and readied myself to get kicked out of the park for doing something that I was sure I’d done wrong. “Well, you have GREAT timing…that ball was right where it should have been every time you shot. Good for you…” And with that, he turned around and didn’t say another word to me for the rest of that game and all of spring training that year.

My timing was pretty good, and it got better with practice. Shooting sports well means that you can regularly anticipate what’s going to happen. I practiced by shooting children playing. Along with being good feature photography for a paper, it helps to improve your timing-when kids run around, they tend to get pretty reckless, which makes it more difficult to get all of the elements of focus, exposure and timing correct. Learning to do this well will improve whatever you’re shooting on the playing field.

Another way that I practiced was by shooting lightning during storms. Now, let me explain that you can shoot lightning by simply putting the camera on a tripod and opening the shutter for a long exposure. But that’s not what I’m talking about. I mean shooting at 1/30 to 1/500 sec and handholding the camera. I got to the point a few years back that during one storm here in Tuscaloosa, I shot 10 frames of film and seven had bolts of lightning in the frame. It’s not easy-lightning is fleeting and rarely lasts for more than half a second. How does this pay off? You learn to get the shots that others miss. It trains you to shoot proactively rather than reactively. Plus, the fun is in the challenge.

While looking through some old images, I’ve pulled together some of the sports moments that I like best. Some are as simple as a Little League game in Munford, AL, while others are as intense as a group of cars driving 200 mph through the tri-oval at Talladega Superspeedway. The thing that strikes me most about these images is that they are, for the most part, different from the daily routine that many shooters get into while making sports images. Each is either shot from a unique viewpoint or overcomes a technical challenge in composition, exposure, timing or in some cases, a combination of all of these. To achieve these goals within the shot is a very special thing.

Without a doubt, all good photojournalists have the basketball and football shots in their portfolios and I do too. But I shoot enough “oddball” sports that I try to use this for examples of my work-the really unusual images that give the editor viewing the pictures something unexpected. When you work for the hometown newspaper of the Crimson Tide, it’s a given that you can shoot football and basketball. I also have some examples of swimming, baseball, gymnastics, track and auto racing, which I use instead. So, if you’re trying to impress editors, go shoot cricket, rugby or some other sport that they don’t see every day-I promise you that these will be the images they will remember.

I have a lot of people ask, What’s the best “sports” lens? It depends on the situation and what you want to accomplish in the image. I’ve seen shots of NASCAR events shot with wide-angle lenses. and with a 1200mm, it simply depends on your vantage point and what you’re looking for in your images. Generally speaking, I use my 300mm more than just about anything else, but I’ll also pull out a 600mm for the long jump. Each photographer has his or her own special way of doing things, and this is the vision that makes images unique and treasurable. It doesn’t matter if you’re working for the paper in Cooter, MO or at Sports Illustrated-what you’ve shot is important to someone looking at it. Be it players themselves or a family member or a fan. And I guess this is why I love shooting sports. It is always appreciated by someone.

There are a few things that I consider critical to shooting good sports. The first and most important is to have some idea of how the sport is played and what to typically expect from it. Know the basic rules, the layout of the field, and generally when the inning, period, or quarter will end.

Position can also be critical. For high school football, I stand either 10 yards ahead of the play or five yards behind. In college and pro football, I move to 15 yards ahead and 10 behind, or head-on in the end zone. In basketball, I stay on the right side of the court simply because the referee always stands on the left side and will get in the way of your shots. In basketball, the digits on a player’s numbers never exceed the number five. This is because, when a referee is calling out a foul, he’s typically holding the basketball in one hand and can only use the other one to call out the numbers, so they never exceed five. In many track and field events, lower angles are more to my liking. The backgrounds tend to be cleaner and again, it’s unusual and makes a more visually interesting image.

These are some of the basics to shooting good sports. The best way to improve is simply go out and do it. Even if it’s a YMCA soccer game, shoot it as if you’ll be showing the images to an editor. Look for the different angles, and think about timing and what you think the player will do next. If you can do these things, your sports shooting will go through the roof in comparison to what you have been shooting.