A tale of courage, survival, and personal dedication. 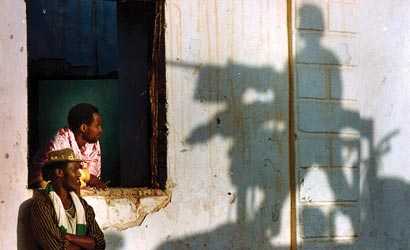 Yunghi Kim could be called a hero of photography on several counts. She has covered many of the great political and social stories of the past decade and a half — the famine in Somalia in 1992; the Rwandan genocide in 1994; the Kosovar refugee crisis in 2000; the wars in Afghanistan and Iraq. She was nominated for this portfolio not because of the major conflicts on her résumé, however, but for the way she turns stories into missions. Her epic project on Korean “comfort women” of World War II, made during the 1990s, remains a touchstone in modern personal photojournalism; a more recent series, on the plight of widows in the male-dominated society of Afghanistan, reflects her capacity to immerse herself in a culture and a cause. For Kim, who shoots for Contact Press Images, every story is a chance to become intimately involved with her subjects. Here, Washington Post staff writer Wil Haygood pays tribute to Kim by recalling the story that established her as a photojournalist of singular dedication.

It was a gentleman who worked for a relief agency in Nairobi who recommended Bardera, a small village near the banks of the Juba River in Somalia. He was wearing a fine suit and had a soft voice. The photographer Yunghi Kim and I, both working for the Boston Globe then, had flown first to Kenya, using Nairobi for a stopover before making our way into Somalia. It was mid-October 1992, and Somalia was torn by more than just war: war and starvation, certainly the twin calamities of a fallen and haunted land. We wanted to get to the war zone and back as safely as possible. We were told the rebels had attacked Bardera some months back and were now busy attacking other regions of the country. “So they will not come back to Bardera. You will be safe there,” the aid worker said.

A Canadian transport plane would be delivering food to the area the following day. Did we wish to catch a lift?

Yunghi and I quickly nodded. We’d get dropped off and catch a flight out three days later on another supply plane.

The next day we found ourselves bouncing around in a transport plane, crossing from Kenya into Somalia and soon enough on the ground, helping the pilot unload bags of food, watching in swirling dust as gaunt Somalis scrambled for the seeds that were blowing away in the wind.

I lost sight of Yunghi in the immediate cacophony of the landing. Only later did I see one of her earliest images: a man enshrouded in dust, all alone but just yards from the landed plane. He looked as if he had descended from the clouds. Yunghi had hit the ground clicking.

We found ourselves in a small village of many women and children. Bob Allen, an Australian aide worker, was doing his best to help keep people alive. But the dying and dead were everywhere.

At dinner on the porch of a small adobe-like house, Yunghi and I picked slowly at our chicken and rice. Tasty, but it was so difficult to eat. We wanted to give our food away. “You must eat,” Allen said, “or you won’t have strength to do what you came here to do.”

It was around 3 a.m. when the first bullets slammed into the house. Bob Allen and I scrambled around in the darkness; I kept yelling Yunghi’s name. She was in another room. Allen thought the soldiers guarding the compound were just shooting into the air, playing. But now the bullets were ricocheting off the walls. Peeking outside a window, we saw rebel soldiers running and firing toward the compound. Chilling on a movie screen; insane up close and real. Yunghi, crouched, held her camera tightly. Allen radioed Nairobi, reporting the attack. Only cryptic words came back. He was told to stay off the airwaves for now.

Within hours, their numbers dwindling from deadly rifle shots, the forces guarding us numbered less than two dozen. And soon, they vanished in the predawn darkness like ghosts through smoke. We were all alone, rebel gunshots echoing outside the walls. I watched Yunghi wrap boxes of film around her waist, hiding it. But we were doomed. Any fool could see. We wouldn’t get back to Nairobi, much less Boston.

When the rebels kicked in the door to the house, we all sat silently in a back room. Maybe they would leave. But their footsteps and voices grew louder, and Allen went out into the hallway. We heard the raising of voices. Then Yunghi and I were summoned. The rebels peppered us with questions. We tried to explain our work, our desire to cover the famine so people in the international community would know.

The rebels looked exhausted from the battle. Some grinned at us; others whispered. The cagey aid worker, Allen, made an offer. He told the rebels that Yunghi and I had medical training, and that we all could accompany the rebels to their hideout to help bandage their wounded.

It sounded like a bluff, but it worked, and soon there we were, in some hilly hideaway of thrown-together huts and bleeding soldiers. Some were already dead, wrapped in long burlap sacks. And right in the middle of this, of hearing the groans of dying soldiers, of looking toward the weeds and hills in the distance and wondering if there was an escape route, I heard a camera shutter. It was the click-click-click of Yunghi Kim’s camera. We were doomed and she was defiant. She’d take pictures, then help with the bandaging of a soldier. Then she’d pick up her camera again. The brazenness startled me. She was raising her camera right at war’s face, at death’s tunnel.

After several hours, we were whisked back to the house. During the journey in an old beat-up truck, a rifle that had been resting between Yunghi’s legs fired, the bullet exiting through the flooring beneath her seat. She didn’t flinch.

At the house, the radio crackled. A ransom had been offered for us. General Mohamed Siad Hersi Morgan, who had been holding us hostage, agreed to the demands. We would be picked up by airplane in the desert, about five miles away. We were told to pack quickly, then we were ushered out to the waiting truck. General Morgan began yelling. “Yunghi! Yunghi!” Our heads snapped in his direction. The warlord suggested Yunghi ride up front with him on our way to the landing area. She did, snapping pictures as the truck sped on the roads, past the dead bodies lying in the ditches along the banks of the Juba River.

We got back to Nairobi, and Yunghi rushed off to get her pictures developed. Nary a complaint about what had just happened. Drained and pale, she refused to let anyone help her carry her cameras. “Thank you but no thanks,” she’d say, moving in her quick-step motion.

The battles in Somalia still rage today, but Yunghi’s 1992 images were among the first by a Westerner to get out of that region. Her photos eerily foretold of a cascading tragedy. Many believe her haunting pictures jump-started the humanitarian action on the part of the first President Bush into that region.

And yet, Yunghi’s pictures from that odyssey — she has undertaken many journeys since then — strike me as more than photos. They are documents of her own perspective on war and humanity. The world must know about the clashing of forces and cultures. I look into the eyes of the wounded rebels in that hillside hut and see young soldiers changed forever, their images caught by a brave photographer who refused to drop her camera when her own fate seemed, at that moment, so unpredictable.