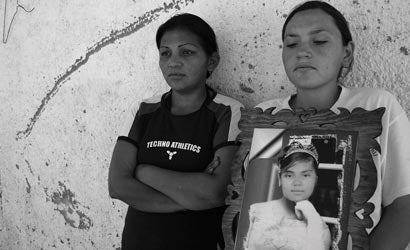 Over the past decade, photojournalist Timothy Fadek has built up a solid career covering the big stories in all the hot spots — Iraq, Israel, last year’s war in Lebanon — but he also seeks out those stories that matter most to him: the crushing poverty in Haiti, the passion of the Christian right, a “hip-hop church” in Queens. Nowhere is his commitment to such journalism more apparent than in his long personal project on Juárez, Mexico. For years, Fadek has been traveling to the troubled border town between Mexico and Texas to document a ghastly legacy — the murders of more than 400 women over the past decade. Jay DeFoore, editor of PopPhoto.com and himself a native of Texas, has followed Fadek’s painstaking work on the story. Here DeFoore describes Fadek’s personal journey.

When Timothy Fadek began shooting his essay on the city of Juárez, he never expected it to be easy. Sure enough, members of street gangs flashed guns at him, and Mexican authorities threatened to throw him in jail. The vibe was clear: Nothing to see here, outsider. Go away.

The city clearly has a lot to hide. Over the last decade, the bodies of more than 400 women have turned up in the area around Ciudad Juárez, a city of one million residents that borders El Paso, Texas. Many of the victims, picked up on their way to work in the maquiladoras, or factories, had been sexually abused and dumped alongside the road. And despite all the media attention, little has been done to stop the carnage.

“Once you get into the grips of the Mexican authorities it’s a black hole, and you can simply disappear,” Fadek says. “You just want to be invisible. You can’t trust anyone in this city. Every journalist who ever does this story eventually becomes paranoid. Every person on the street becomes suspicious.”

Despite the difficulties, Fadek is committed to shedding light on the plight of the women of Juárez. Other journalists have covered the story; in fact, it was an article in The New Yorker several years ago that first got Fadek interested in the subject. But what drives him is the desire to do it better. “I had seen stories in Rolling Stone, the New York Times, and The New Yorker, but I never felt it had been photographed properly,” he says.

Fadek lives in Spanish Harlem in New York City, speaks fluent Spanish, and has a real affinity for Latin American culture. But his path to these dusty street corners and alleyways in Juárez was not a straight one. A marketing major in college, Fadek took a job as an account executive at a New York advertising agency after graduation. He later went to work for McCann-Erickson, one of the largest ad agencies, in their Frankfurt office.

It was in Germany that Fadek had the political awakening that led him to abandon the advertising world for a career in photojournalism. In his spare time, he began photographing demonstrations of Kurdish Turks living in Germany who were being terrorized by neo-Nazis, and soon his transition from simply reading about the news to being a part of it was complete.

“The idea of creating ad campaigns to persuade people to buy GM cars didn’t have the same value to me anymore,” he recalls now. “For those who stick with [advertising], great, but to me it felt empty.”

Fadek returned to New York, where he took photography courses at the School of Visual Arts, and slowly he began to get his work published. His first professional assignment, a portrait shoot for the New York Times, came in 1997. The following year the Associated Press sent him to Venezuela to cover the presidential election.

To Work and Die in Juárez, the title of his border-town project, began first as a personal assignment. After covering the Mexican presidential candidates in 2006, instead of heading home, he traveled to Juárez to take his first round of images. The project was self-financed, with the help of his agency, Polaris Images. Based on the photos from that trip, he was able to pitch a story to the German news magazine Stern, which assigned him for a second trip.

“There’s no reason you can’t keep reporting on it to keep it in front of the public and the readership, trying to find a new angle and just keep people talking,” Fadek says.

Does it matter? Do pictures and dedication like Fadek’s make a difference? The answer is yes, if only slowly. As Fadek and others like him push for change in Juárez, the outside world has begun to notice. Even Hollywood is paying attention: A Jennifer Lopez film called Bordertown debuted in February at the Berlin International Film Festival.