Assessing the Dangerous Life of a Photographer in Iraq. 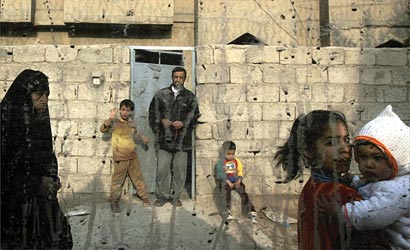 The International Federation of Journalists reported in December that 2006 was the deadliest on record for journalists and media workers, and that the most dangerous story for them was Iraq. According to the federation, 68 media workers were killed there last year. Photographers are often vulnerable because their jobs require them to get as close as possible to events. Here, Regis Le Sommier, the New York bureau chief of Paris Match, pays tribute to one of those photographers, Chris Hondros of Getty Images. While Hondros, 37, has photographed in places like Kosovo, Sierra Leone, Afghanistan, and the West Bank, Iraq has proven to be a story of unique importance — and risk.

I went twice to Iraq with Chris Hondros in 2006. In March, at the time of our first trip together, Chris had already visited the country six times, starting with the initial phase of the invasion in 2003, when his car was destroyed by the bullets of Saddam loyalists. Chris usually stays in the country from three to six weeks. He says that the job gets harder, the situation on the ground worse, from each trip to the next, and our two forays into Iraq were no exception. In March, Getty Images sent a driver to pick us up from the Baghdad airport and bring us to the Hamra hotel downtown, where the agency is hunkered down along with other media outfits. When we returned in November, two cars were waiting for us — one to transport Chris and me, the second, following closely, to stand guard in case of a kidnapping attempt. We also had to place a black screen on our window so we couldn’t be seen inside. That increased level of protection was everywhere. The military vehicles on the outskirts of the airport had been transformed over eight months: New layers of armor turned the Humvees and stryckers into battleships. After five minutes in Baghdad, you knew the situation had deteriorated.

When in Iraq, Chris goes on embeds, which means he travels with U.S. troops in places where anything can happen at any time. In between patrols, he spends half his time sleeping. Like him, I learned how to switch off my body whenever possible to recuperate. Iraq sucks your energy while playing with your nerves. Chris also spends a lot of time filing pictures, or engaging in endless conversations about world politics, or listening to Bach’s Goldberg variations. He is a talker who loves music. He doesn’t particularly like hanging with the military but has always considered being embedded as a unique opportunity — these days the only possible way for a Western photographer — to cover a war that remains the biggest story of our generation. With few exceptions, the routine civilian horrors belong to native Iraqi photographers who, in spite of the risks they take to illustrate our daily papers, are nowhere to be seen at Visa pour l’Image and other photo shows.

Contrary to a common view, the military does not try to prevent embeds from seeing things or speaking to people. You live with the troops, eat with them, go to the gym with them, pray with them, and patrol day and night in streets where their job is often to wait for the bullet to come or the IED to strike. Things can be rough on a psychological level. During our last embed, we had to sleep every night in what had been the room of an American colonel killed a week before our visit. Trust is hard to find anywhere. Everyone is always watching their back, and one look can tell all. Chris is there to capture it. The cultural gap is sometimes so great it can be funny, like a little girl kissing a soldier when the writing on the wall behind them says “Down with the U.S.,” or a rookie soldier feeling nervous because he thinks he saw a poster of Zarqawi on a wall, whereas it was that of Muqtada al-Sadr. The rookie will soon learn. These kinds of mistakes can get you killed.

There are times you really wonder why you are there, times when you’re not sure what is new that you are bringing to the story, or if it was worth taking such a risk. Those questions crossed Chris’s mind many times. Chris’s best picture from Iraq is a perfect illustration of this. In December 2004, things were getting edgy in Mosul. Reporters were lining up in the Baghdad Green Zone to get on a helicopter that would bring them to the freshest war zone. Chris was with one of them, but as he arrived in Mosul, he learned he was going to be sent to Tal Afar instead. He got mad and complained to the Public Affairs Officer. At this time, Tal Afar was barely known. His embed proved rather boring. Routine patrols with soldiers pointing their guns at buildings, people looking scared, an occasional gun battle, but not much action. Until one day, when a civilian car approached a U.S. checkpoint at sunset. The car wouldn’t stop. The soldiers opened fire. Out of the car came a group of children, including a little girl covered in the blood of her parents, who had just been shot. I saw the picture later in the New York Times. I was attending President Bush’s inauguration speech in D.C. in January 2005. It spoke to me immediately because, like my daughter, the girl had a way of placing her hands in front of her as if asking for something. In this case it was, “Why are my parents dead?” At the time, the presidential election had cast Iraq aside in the news. The Republicans were savoring their victory. Chris’s picture was like a premonition of what was to come.

The French writer André Malraux defined a civil war as the worst kind of war “because you know who you kill.” It’s true of Iraq, except the U.S. troops don’t know who kills whom and often don’t even know who kills them. As a photographer, Chris Hondros tries to show this growing confusion through his eyes and lenses. The strength of his pictures is that they can bring through a smile, an awkward look, or a mere shadow, a telling dimension from the world of Iraq as a metaphor of hell.