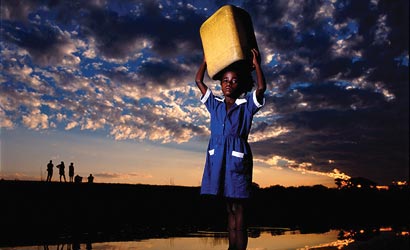 Few photographers, like Brent Stirton, have been called an “invaluable asset” by men as well respected as Richard Holbrooke. Holbrooke designed the Dayton peace accords, has been nominated seven times for the Nobel Peace Prize, and has served as U.S. ambassador to the United Nations and Germany and as assistant secretary of state for European and Canadian affairs plus East Asian and Pacific affairs. He knows Stirton, a native South African, through the photographer’s ongoing work with the Global Business Coalition on HIV/AIDS, Tuberculosis and Malaria (GBC), of which Holbrooke is president. Having seen Stirton find the decisive moments in some of the world’s worst situations, Holbrooke says he is especially impressed by the Getty photographer’s ability to capture empowering images by putting his subjects at ease. Stirton’s admirers in high places also include Angelina Jolie and Brad Pitt, who chose him to shoot the first pictures of their superstar baby, Shiloh. The photos reportedly garnered around $10 million worldwide, which Jolie and Pitt have said they will donate to charity.

If Brent Stirton is a hero, the word must be synonymous with “enigma.” Under no circumstance could Brent be called a small man, yet he manages to be invisible. He blends into the scenery or, perhaps, becomes a part of it in a way that he clearly captures in his images. There is nothing voyeuristic about Brent’s work. In contrast, something very unusual happens when you look at Brent’s photos. You don’t feel as if you are examining his subjects but, rather, that they are examining you. “I see you,” his subjects seem to say, “and I know you can change the world, so you had better get to work.”

Brent’s tendency to step inside his subjects and empower them must be a particularly daunting task, for he stands more than six feet tall. But when he puts that gigantic lens in front of his face, Brent disappears and all we can see is his subject. It doesn’t matter where he is — navigating an Iraq battlefield, visiting AIDS orphans in South Africa, or watching a Sri Lankan monk pray for children killed when the 2004 tsunami derailed their train. There is no situation in which Brent is uncomfortable, though I have serious doubts about whether he owns a proper suit and tie.

Brent is terribly modest and, perhaps, a bit shy when he meets people who have encountered and currently endure dire situations: extreme poverty, death, disease, debilitation. Yet he quickly makes them feel so comfortable and at ease that they are soon telling him their life stories and holding up their babies for him to photograph. This is a rare skill and one that makes Brent an invaluable asset to my organization, the Global Business Coalition on HIV/AIDS, Tuberculosis and Malaria (GBC). Brent donates three weeks a year to GBC, and we take full advantage of his time — often leaving him with only a couple of hours to sleep each night.

This past World AIDS Day, Brent joined a GBC member company field trip to Kenya. It was amazing to watch him work. Totally oblivious to the fact that he was knee-deep in mud, Brent was unstoppable in Nairobi’s Kiambiyu slum. He photographed a ten-year-old AIDS orphan at the moment she broke into tears, captured young film fans taking in an afternoon movie, and showed the hope that microfinance loans can give women affected by and infected with HIV.

Given strict instructions to visit an inordinate number of organizations, member companies, and partner organizations, Brent has been to South Africa, China, Ukraine, India, and Kenya wearing a GBC hat. His images decorate our offices, inspiring a dedicated staff that often works long hours and remains deeply committed to people they may never meet or even speak to. Most importantly, though, we use Brent’s images on our Website and in our communications vehicles to show why the private sector must get involved in HIV/AIDS, tuberculosis, and malaria. No one can argue with a Brent Stirton photograph.