Only in New York: Photographers Homeless After Matzo Bakery is found in Basement of Renowned Brooklyn Building

The building at 475 Kent Street in the Williamsburg section of Brooklyn is well known in the New York photo community. Informally called the “kibbutz,” it has over the past decade been home for a number of photojournalists, fashion photographers, and artists. 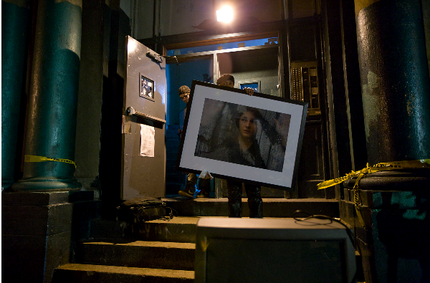 The building at 475 Kent Street in the Williamsburg section of Brooklyn is well known in the New York photo community. Informally called the “kibbutz,” it has over the past decade been home for a number of photojournalists, fashion photographers, and artists. But yesterday city officials kicked everyone out after discovering a clandestine matzo bakery in the basement, along with about 50,000 pounds of wheat grain.
One of the residents, National Geographic photographer David Alan Harvey, was in India when the evictions occurred, but his assistants helped pack up his belongings—including boxes of negatives. On his blog Harvey wrote simply, “I have no home…no place to go….Does anyone out there have an extra sofa for me to sleep?” (By this morning, he had more than 100 invitations.)
I’ve spent many happy moments myself at the kibbutz, hobnobbing in Harvey’s former apartment with other building residents, who lately have included photographers Paolo Pellegrin, Robert Clark, Kadir van Lohuizen, and Stanley Greene. The photo above shows Greene’s apartment being emptied yesterday.
Clark, who moved into the building nine years ago, had more recently moved his residence to a building across the street, but he maintained a studio and office in the kibbutz. He is largely responsible for turning the building into what essentially was a photographic community. “Every time I’d hear about an apartment becoming available I’d try to bring in another photographer,” he told me this morning.
The building is zoned for commercial use, not residential use, but Clark says he has led fire inspectors from the area through the kibbutz on many occasions. He says that residents were aware that the matzo bakery was operating in the building, but no one had any idea that silos of grain were being stored there. Stored grain can be highly combustible.
According to reports, the building’s owner, Nachman Brach, said he was “trying to figure” a way to get tenants back into the building after repairs are made. But Clark, for one, is suspicious. “A lot of the leases were going to come up this summer, and there may be other plans for the building,” he notes.
The kibbutz was more than just a home for photographers and artists. It was part clubhouse, part study hall, part dorm—an available base for friends and associates passing through the city. Recently, Harvey has conducted a series of popular photo workshops there. There was nothing like it anywhere else. And now it too may be a piece of photographic history.
–David Schonauer