Nature and Humanism at National Geographic

National Geographic’s annual photography seminar was pretty much a homerun, at least as I viewed it. The day-long program, which took place on Thursday at the National Geographic headquarters in Washington, D.C., began by celebrating one of photography’s greatest names, then proceeded to some dazzling nature photography. Surprisingly, most of the program was devoted to humanistic themes. 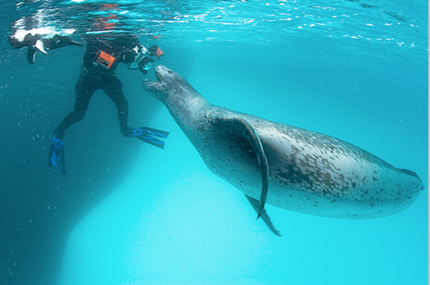 National Geographic’s annual photography seminar was pretty much a homerun, at least as I viewed it. The day-long program, which took place on Thursday at the National Geographic headquarters in Washington, D.C., began by celebrating one of photography’s greatest names, then proceeded to some dazzling nature photography. Surprisingly, most of the program was devoted to humanistic themes. Is this a clue as to the future of Geographic?
Leading off the day in a big way, National Geographic magazine director of photography David Griffin introduced a special guest, the famed photojournalist David Douglas Duncan, who, though nearly 92, flew in for the event from his home in the south of France. He was interviewed on stage at the seminar by Jean Francois Leroy, the director of the VISA Pour L’Image photojournalism festival in Perpignan, France.
There is no underestimating the importance that Duncan held for this particular crowd of photographers. Photojournalist David Burnett summed it up when he said that Duncan’s book “This is War! A Photo Narrative of the Korean War” was the work that inspired him to become a photographer. On stage, Duncan’s memories came in lovely, meandering waves. Often a question would bring him to the edge of tears. “Change the subject,” he would then say. It was possible, in such instances, the catch a glimpse of the emotional soul that lies at the heart of great photography.
On to natural history: Geographic photographer Paul Nicklen showed work from his recent series on leopard seals. He focused on pictures of one seal in particular, a 1,000-pound female (above). Though leopard seals are known for their aggressive behavior, this one, he said, seemed to take pity on him as “an inferior mammal” and brought him dead penguins to eat. (Go here to see the images on Nicklen’s website, and here to see the story in National Geographic.) You could call this nature with a humanistic backlight.
After being named the recipient of National Geographic’s first Grant for Photography (worth $50,000), photographer Eugene Richards showed work from his project “War is Personal,” a multi-media piece on damaged American soldiers coming back from Iraq. The project has all the hallmarks of Richards’ work: it dwells fearlessly, relentlessly in a world of tragedy.
Alec Soth, best known for his book “Sleeping by the Mississippi” and for his work in the New York Times magazine and other publications, gave a brief overview of his career, which started in the art world and then veered toward journalism.
Louisiana-born Debbie Fleming Caffery, another photographer with roots in the art world, showed a group of post-Katrina images and work from her noted “Sugar Cane Harvest” series. Then came Larry Fink, who, as he himself noted, has been called “the world’s greatest party photographer.” Fink’s images of high-society soirees, distinguished by his off-camera flash and willingness to focus on legs and feet, are in fact not party pictures at all but ironic meditations of social class and identity.
The show closed with the announcement (by photographer Michael K. Nichols) that his Look3 Festival of the Photograph would again take in Charlottesville, Virginia this June 14-14. This year’s festival will focus on the work of Mary Ellen Mark, Joel-Peter Witken, and James Nachtwey. Go here for information.