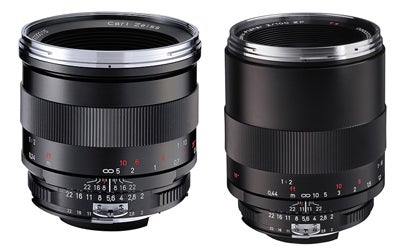 I’ve been shooting lately with two new Nikon F-mount Zeiss lenses, the ZF 100mm f/2 Makro-Planar T* ($1,500, street) and the ZF 50mm f/2 Makro-Planar T* ($999, estimated street). As you’d expect from a Zeiss-made optic, they are both simply razor sharp, and are also impressively heavy, in these days of featherweight zooms, due in part to their full-metal barrel. No, they don’t have autofocus — nor do any of the other “premium” manual-focus lenses Zeiss is making for Nikon F, Pentax K, and M42 (threaded) mounts — but I haven’t really missed it.

Depth of field is so shallow when you’re shooting very close that autofocus can be more of a hindrance than a help: Wide-area AF arrays rarely pick the focus point you need to put the plane of focus where it should be to optimize depth of field, and even if you switch to single-point AF it can take a few lock-focus-and-recompose routines to get it right. As you know, you often want to place the plane of focus midway into the subject and leave it there, stopping down to sharpen everything else that matters.

In fact manual focus is such a pleasure with the viewfinder of the full-frame Nikon D3, which I’ve been using with the lenses, that I’ve been shooting wide-open to get really, really shallow depth of field. (I’ve included a few examples here.) The Zeiss ZF macros invite that kind of fun because they’re a stop faster than other good macros, which typically have a maximum aperture of f/2.8. Shooting with the lenses set to f/2 with reproduction ratios approaching 1:2, their limit, produces a pinpoint-focus effect with dramatic defocus — no Lensbaby needed. And the defocused areas are beautifully smooth because they aren’t being aided or abetted by distortion. (Zeiss says that these optics borrow from its super-duper cine lenses, technology that gives them “exceptionally selective focus,” but isn’t depth of field depth of field?)

I favored the 50mm macro, an eight-element design, because I’ve always loved the combination of normal perspective and very shallow depth of field. It’s entirely different than the shallow depth of field you get with long lenses, which comes hand-in-hand with compressed perspective. On a Nikon D300 or other Nikon D-SLRs, of course, the cameras’ APS-C-sized image sensors make the 50mm lens equivalent in its angle of view to a slightly-long 75mm in the full-frame 35mm format.

For most purposes, though, the nine-element 100mm, which is equivalent to about 150mm (in 35mm) when used on any Nikon D-SLR other than the D3, is probably the more versatile of the two lenses. That’s because it provides greater working distance (meaning you can shoot the same area of the subject from farther away) and smooths out-of-focus background detail (because it “sees” less of the background behind the main subject). I just wish that like my old Nikon 105mm f/2.8 macro it stopped down to f/32 instead of f/22, for those times when you want just about everything sharp.

I confess I’m also fond of the combination of shallow depth of field with a wide angle of view. So when I return these two lenses to Zeiss I’m hoping to borrow the new ZF 28mm f/2 Distagon T* in their place. I still have my old 28mm f/2 AI-S Nikkor in a drawer, inviting comparison. The new wide-angle is also available as a ZK lens, but unfortunately there’s no full-frame Pentax D-SLR to put it on at this point, so I wouldn’t get the full goodness of its angle of view. Maybe I’ll have to start looking for my old Pentax K1000. Wait — I gave that to my sister, about 30 years ago.

Discuss these Zeiss optics at American Photo’s State of the Art blog.