U.S. Supreme Court Rules in Favor of Peter Turnley and Harper’s in Suit over Casket Photo

Yesterday the U.S. Supreme Court upheld a lower court decision in favor of Harper's magazine and photographer Peter Turnley, which was published in 2004. The essay showed funerals of U.S. 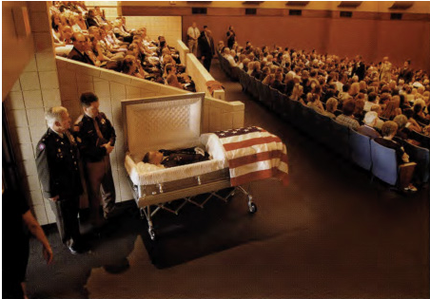 Yesterday the U.S. Supreme Court upheld a lower court decision in favor of Harper’s magazine and photographer Peter Turnley, ending a legal battle over a heartbreaking image of an American soldier’s funeral.
The photograph, which showed Sergeant Kyle Brinlee lying in an open casket, was part of a photo essay by Turnley called “The Bereaved: Mourning the Dead, in America and Iraq,” which was published in 2004. The essay showed funerals of U.S. soldiers killed in Iraq as well as funerals if Iraqi civilians.
Sergeant Brinlee’s biological father and maternal grandfather sued the magazine and Turnley, a contributing editor for Harper’s, claiming the photograph represented an invasion of privacy. In March, 2007, the 10th U.S. Circuit Court of Appeals upheld a district court ruling that the funeral was a newsworthy event and a matter of public interest. Harper’s also showed that Turnley had the family’s permission to photograph at the funeral.
The facts in the case were really never in doubt and clearly supported the claims of Turnley and Harper’s. Though some of Sergeant Brinlee’s relatives didn’t like the Turnley’s essay after it appeared in print, the story was a valid and enlightening perspective on the Iraq war.
–David Schonauer