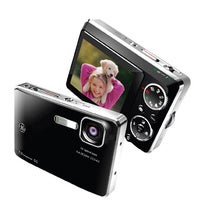 Here’s another measure of how mainstream digital cameras have become: General Electric is getting into the business. Now you can buy your point-and-shoot from the same company that made your refrigerator. GE will be selling models ranging from seven to 12 megapixels, all with the image stabilization and high ISO settings that make it more realistic to turn off that ugly frontal flash.

The California-based creator of the line, a new outfit called (of course) General Imaging, is chaired by a former president of Olympus, and its chief designer is the man who brought you the good looks of Sony VAIO computers and Olympus Stylus point-and-shoots. So we’re hopeful that the GE cameras will be better-looking than our office microwave, though the company is also promising a snapshot printer that’s bound to resemble a toaster. If Panasonic and Samsung can do it, then so can GE.

Photo: A sample from the “G” series of new GE digital camera line.