Seven tips for shooting nature photos with your smartphone camera 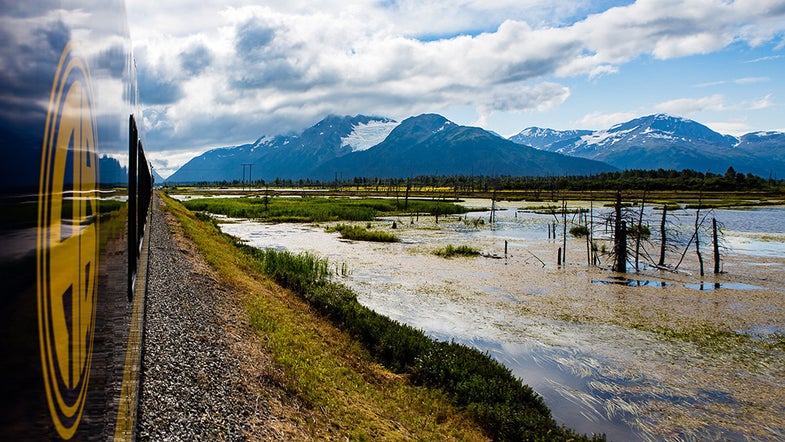 Leaning outside the viewing window on this Alaskan train allowed me to include some of the cars in the photo to give context to the rest of the scene. Shot with a Nokia Lumia 910. Stan Horaczek
SHARE

National Geographic photographer Jim Richardson is responsible for some of the best photography advice ever given: “If you want to be a better photographer, stand in front of more interesting stuff.” Nature is full of interesting stuff, and, thanks to smartphones, we’re almost never without a pretty-good-quality camera.

But even the most-beautiful, surprising location won’t be very photogenic in the wrong circumstances. Below, a few quick tips to help you get the most out of your next nature photography adventure.

Straighten out your horizon

A crooked horizon can ruin any landscape shot. It’s not always possible to get it exactly right when you shoot it, but take the time to straighten things up before sharing.

Use HDR mode, or shoot in raw if you’re feeling ambitious

Landscape photos are a great opportunity to leverage the HDR setting in your camera app. It may be enabled by default, but you can turn it on from your camera app settings, if not. When enabled, HDR mode will take several photos in rapid succession and then combine the image data into one photo. As a result, it will preserve more details that might otherwise get blown out or lost in dark shadows. This is especially handy in high-contrast scenes like bright daylight. Be sure to check your results after shooting, though, because HDR can sometimes make a scene look unnaturally flat in tone.

If you’re feeling ambitious, you can also try shooting in raw mode, which is a capability most smartphones attained just recently (your best bet to enable this is to use an advanced camera app like Camera+). When the camera creates a JPEG version of the image, it clips off image information in the darkest and brightest parts of the photo. You’ll need to use a more advanced editing app like Adobe’s Lightroom Mobile to take advantage of that extra data, but it can provide a lot more flexibility in terms of the overall look of the finished product.

Pick the perfect time of day to go shooting

The definition of “good” light can vary from person to person depending on their tastes, but even a truly majestic view can be ruined by harsh overhead light. If you want warm, magical illumination, plan to get to your location around the start of golden hour, which is roughly an hour before sunrise and then again before sunset. Using an app like the awesome Photo Pills will let you know exactly what to expect from the sun at any given time. If you don’t want to spend the money on Photo Pills, you can use other free golden hour apps or even web-based utilities like golden-hour.com.

Epic scenery can be hypnotizing in its beauty, but once you’ve got your wide shots, look around for smaller features and details that can help set the scene. Find some leaves bathed in sweet golden hour light or get a close-up of the texture of some particularly interesting rocks. The detail shots will be pretty on their own, but they will also give context to the landscape photos when you share them online, especially in a series.

Be careful where you place the sun

Putting the sun within the frame of your picture can be tricky business. The intense brightness will often cause the rest of the image to darken, and flare from the rays can spread across the image, washing out contrast and introducing odd-looking blobs of color—typically purple, green, or sometimes white. Flare can happen even if the sun is just outside your frame, so try shading the lens of your camera, using your hand like the brim of a hat to keep the sun from directly hitting the lens.

Use the rule of thirds with caution

Many phone apps have a built-in grid that splits the frame into thirds vertically and horizontally. This is a nod to a basic composition tip called the “rule of thirds.” The idea is that putting the horizon of your landscape photo on one of the two horizontal lines will create a photo that feels balanced. Sometimes, this is true. Other times, this leads you to sacrifice a third of your image to boring, featureless blue sky at the top or nearly texture-free sand at the bottom. Fill your frame with the most interesting parts of the scene and try different compositions until things feel balanced. Don’t let an on-screen grid dictate what looks good to you. (Jim Richardson’s photo above was likely not shot with a smartphone, but expertly uses a split frame composition that defies the rule of thirds.)

Give your image scale

A post shared by Cristina Mittermeier (@cristinamittermeier) on Aug 26, 2016 at 9:03am PDT

The camera has a way of making spectacular things look less impressive. Trails don’t look as steep, mountains don’t look as tall, and forests don’t look quite as majestic. The wide-angle lens on your smartphone is partially to blame, but you can combat this by looking for ways to add scale. Conservation photographer Cristina Mittermeier masterfully uses humans for scale by making them small in the frame. Birds are another great option for giving scale, but you might have to wait for some to fly by.