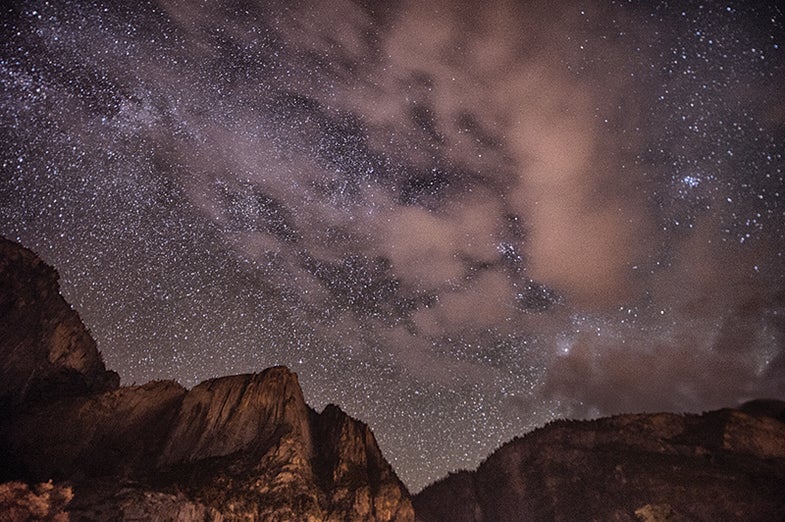 Keep the heavens sharp For a bright sky, Banzon exposed for 30 sec at f/2.8, ISO 4000. Treks have taught him to master his camera "like a soldier masters his gun before battle.".
SHARE

After midnight on a frigid November night in 2014, Manny Banzon, an orthopedic surgeon from Freehold, New Jersey, reached a clearing high in the Sierra Nevada mountains at Yosemite National Park. The atmosphere was free of dust, humidity, and light pollution, and this view of the Milky Way proved one of the most stirring he’d experienced across eight Mentor Series adventures that had spanned the globe.

“Earlier that afternoon, we had just gotten back from a shoot and everyone was tired with achy feet from hiking,” Banzon recalls. “The mentors proposed astrophotography as an after-dinner project, but I didn’t think the group was particularly receptive to the idea.” To his surprise, later that night a majority of the trekkers showed up at the predetermined meeting place, and after a 15-minute walk through the dark, they encountered the scene above.

Banzon learned a lot about shooting stars that night. “For astrophotography, you need a fast, wide-angle lens and a sturdy tripod, and it helps to be patient and persistent,” he says. The wide-angle lens will embrace most of the sky, while its large aperture will provide workable exposures despite the low light levels.

“The mentors told us to set an ISO from 3000 to 4000. Any higher, and there would be too much noise. Any lower, and our shutter speeds would rise above 30 sec, the point where stars become star trails,” says Banzon. Shooting near maximum aperture also helped hold shutter speeds to 30 sec.

As for composing the night sky, Banzon recommends including a framing element in your fore-ground—the mountain peaks above, for example. “If you do, you will probably need to pull back your focus a bit to keep that foreground sharp,” he suggests.

An ardent trekker, he and his wife Louise just returned from a Mentor trip to Venice, Italy, and Croatia. _Photo: Louise Banzon _