The neon lights of South Beach make for great photos 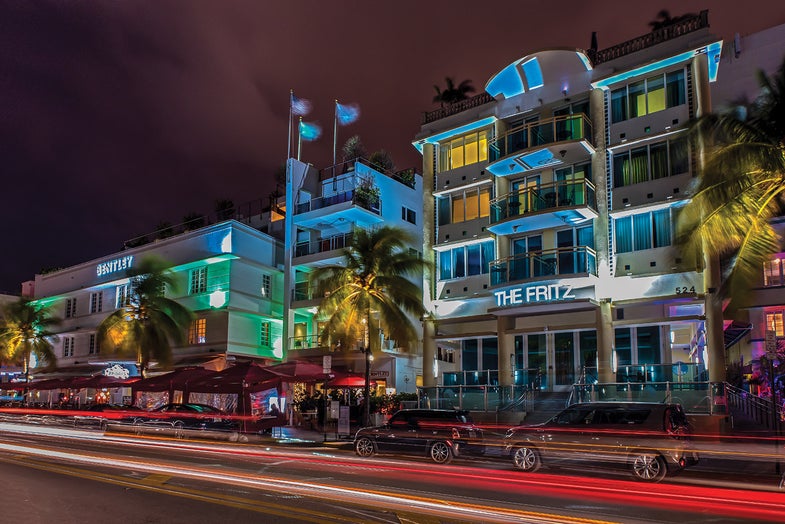 To broaden his photo skills, Gary Gustin signed on for last February’s Mentor Series Lighting Workshop in Miami Beach. “I wanted to learn something about using flash,” says the retired physician assistant from Largo, Florida. “Because I shoot mainly landscapes and travel, I don’t get to work with them much.”

The main thing he learned during the three-day workshop? Even bad lighting can be good. “Usually, you don’t want to shoot under bright midday sun because it’s pretty harsh lighting,” he says. “But if you add a speedlight, the lighting isn’t so harsh anymore.” That pop of flash puts some detail in the black shadows cast by the sun. And if your subject is active—Gustin was shooting beach volleyball players—a TTL flash’s high-speed sync function will freeze the action with a fast shutter speed. “With the right tool, you can make good pictures in bad light,” he says.

After nightfall on the first day, the crew headed over to the famous art deco hotels on Ocean Drive. For the shot shown here, Gustin found an unobtrusive place between two parked cars to set up his tripod. “With the tripod, I could use an 8 sec exposure and ISO 100 [at f/16], which meant no noise, no moving cars, and no tourists. Although there were lots of people walking on the opposite sidewalk, the long exposure reduced them to invisible blurs. It did the same thing for the moving cars. All you see of them are the head- and tail-light streaks.”

As for the tourists on his side of the street? They were convinced that the workshop shooters were paparazzi waiting for someone famous to emerge from a limo. “We drew quite a crowd,” Gustin says with a smile. “They wouldn’t leave!”