Capturing the terrifying blazes from above. 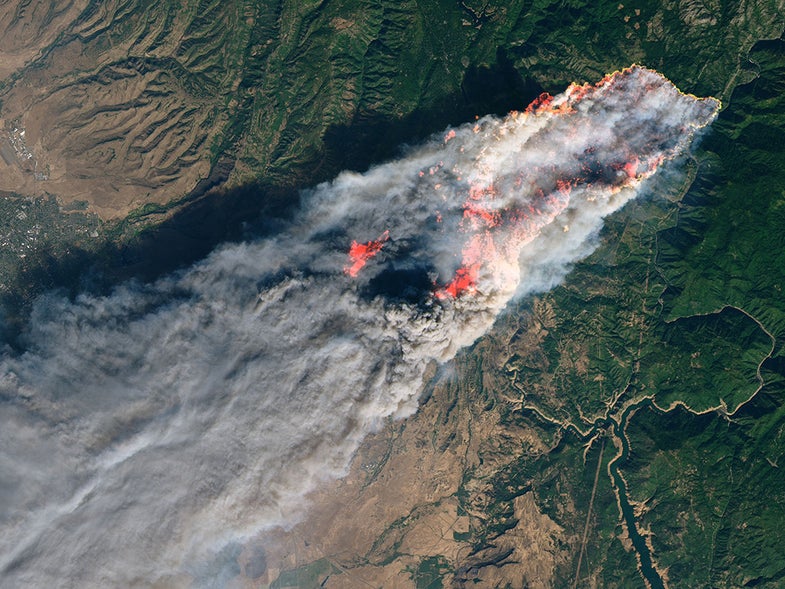 A terrible combination of low humidity, dry vegetation, and high winds had Californians racing to escape multiple massive fires on Friday: the Camp Fire in Northern California has devastated the town of Paradise and killed at least five people, according to police, and meanwhile, one of two ongoing blazes in Southern California has prompted evacuations in Malibu. Truly hellish images and video taken by residents running from the scene are no exaggeration; these wildfires present an ongoing and potentially deadly threat. Those in surrounding areas should stay vigilant and evacuate if so advised.

Images captured from high above the fray may be less evocative of some big-budget disaster film, but they put the wildfires into terrifying perspective. NASA’s Terra satellite captured the image above on Friday morning, showing the massive spread of smoke from all three blazes out into the ocean.

On Thursday morning NASA’s Landsat 8 acquired a closer view of the Camp Fire, which had started just around four hours earlier. Areas of active fire are highlighted with short-wave infrared light. By 8:00 p.m. local time, the Camp Fire had consumed some 20,000 acres of land; the latest reports say 70,000 acres have burned, and the fire is five percent contained.

The last five years have been packed with superlative wildfires in the region, but experts say that infernos of this magnitude are likely the new norm. Climate change is creating gradually warmer and drier conditions across much of the Southwest.

If you’re in the area, please brush up on wildfire safety tips and pay attention to evacuation advisories—and please stay safe.