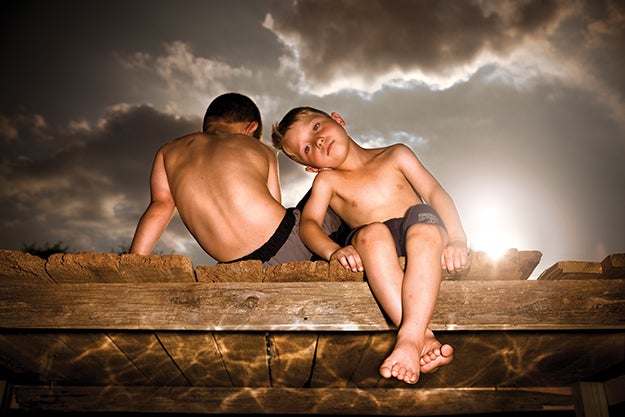 In photographing his two sons for a personal project called Water’s Edge, Clark Vandergrift wanted “to create dreamlike views of summertime escapes to swimming holes, beaches, and other romantic oases,” he recalls.

But the photographer faced two problems. There was no major body of water near his location in Reisterstown, Maryland. And he wanted the detail in the day’s beautiful cloudscape to appear in his flash-lit portrait, which would have required a much faster shutter speed than the 1/250 sec top flash-sync speed he could get using his Canon EOS-1Ds Mark III.

His solutions? Vandergrift composited in glints of light reflecting off water shot elsewhere, and, to balance the flash exposure with the bright clouds, he tapped PocketWizard’s HyperSync technology. Like the high-speed flash syncing built into sophisticated shoe-mount flashes, HyperSync lets you sync flash and shutter at speeds up to 1/8000 sec. Its main advantage, though? It allows for a very bright flash output, unlike high-speed syncing which uses relatively weak pulses of light that prohibit deep flash-to-subject distances.

This let Vandergrift make his flash exposure at 1/2000 sec without fear of the shutter curtains throwing shadows across his camera’s sensor. “The basic principal is to dial up the strobe as bright as possible for the longest flash duration possible,” he explains. “Then by using one of the PocketWizard ControlTL remote flash triggers—I used the Flex TT5—the strobe is fired just prior to the shutter opening and remains on the entire time that the shutter is fully open. Essentially, the strobe becomes a continuous light source.”

An added benefit of this is that “HyperSync lets shutter speeds, in addition to apertures, influence flash exposure,” says Vandergrift. “Without it, flash exposure is usually controlled exclusively by the aperture setting.” He could shoot at the relatively bright aperture of f/5.6 while still slightly underexposing the clouds and retaining their detail. “HyperSync made this shot because I really didn’t want to work completely stopped down. A totally stopped-down image with hard lighting looks unnatural, and I wanted a natural, organic feel—f/5.6 was where I needed to be,” he says.

Vandergrift lit the scene with the now-discontinued Dynalite 4040 strobe head (A) and M2000e power pack (B). (Comparable current models shown below.) The strobe was powered by a Honda EU 2000i generator (C). He positioned his Canon EOS-1Ds Mark III (D) and PocketWizard Flex TT5 wireless flash trigger below his subjects so that he could aim upward, thereby concealing the location of the shoot: a field near his small Maryland farm/studio. He shot tethered to a laptop (E) that he used to evaluate and compare shots. He constructed his set (F) from 2×4 and 4×4 posts to which he secured old barn wood that resembled a weathered pier. Finally, the rippled light under the pier was a composited shot of reflections at the bottom of a pool. Actually reflecting light off water on set wouldn’t have given Vandergrift enough control over the reflections’ pattern or placement.