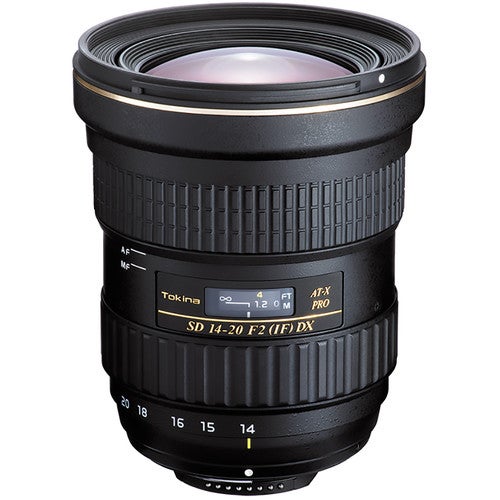 Tokina has carved out a niche in ultrawide-angle zoom lenses for Canon and Nikon DSLRs, and it makes them really well. The two previous Tokina APS-C-format lenses in this category, an 11–16mm f/2.8 and 11–20mm f/2.8, proved among the optically strongest digital-only, ultrawide zooms we’ve tested. So why make a new lens with such a similar focal range? To achieve something extraordinary in the ultrawide zoom world—a bigger maximum aperture.

The new lens has 13 elements in 11 groups in a new proprietary optical design that uses three asperical lens elements—two super-low-dispersion and one a precision-molded “P-MO” element. This layout provides excellent sharpness and contrast, also corrects for spherical aberrations while keeping the lens compact. The fast f/2 aperture lets you shoot landscapes in low light without a tripod.

Autofocus is fast but just a bit noisy. And while the manual-focus ring moves smoothly, the zoom ring is a tad tight. Both these rings are deeply ridged and easy to distinguish by touch. Like all current Tokina lenses, it has a nifty push/pull focus clutch that we have come to love: The focus ring pushes out for autofocus and pulls in for manual—quite handy once you get used to it.

On our optical bench in the Popular Photography Test Lab, the lens produced Excellent SQF results for sharpness and contrast at all three focal lengths at our 11×14 enlargement benchmark, slightly better than the Fujifilm, the Sigma 10–20mm, the Tamron, and the other two Tokinas. Only the Sigma 18–35mm f/1.8 did better.

The street price is a reasonable $899—reasonable because of the wide angle but also because of the unusually fast f/2 maximum aperture. The fast speed on this lens was a nice surprise from Tokina, and we hope the company continues to surprise us in the wide-angle category.