This manual-focus lens is a bargain with a fast aperture. 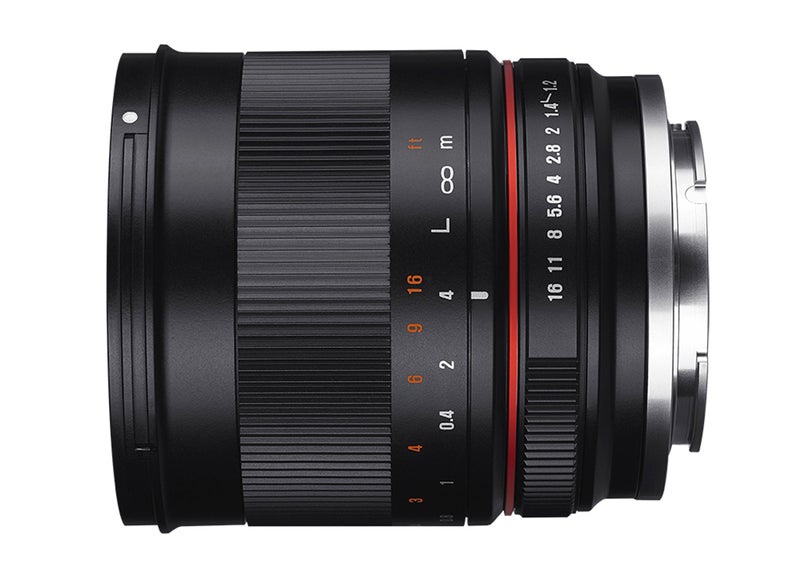 With the wholesale adoption of interchangeable-lens compact (ILC) cameras by major manufacturers, third-party lens makers are churning out glass for a new class of largely crop-sensor shooters. One such recent release is Rokinon’s 50mm f/1.2 AS UMC, a fast optic that ships in four mounts: Canon EF-M, Fujifilm X (our test model), Micro Four Thirds, and Sony E. Depending on which mount you use, this $549 (street) lens has a full-frame equivalent focal length of 75mm (on APS-C sensors) or 100mm (on Four Thirds). Aesthetically-minded shooters will be happy to learn that this 50mm comes not only in standard black but also in silver for all mounts save the Canon. Like all Rokinon glass, it must be focused manually—no autofocus. The 62mm filter mount in front does not rotate, good news for photographers who shoot with polarizers. Its optical formula comprises nine elements in seven groups, including a pair of aspherical elements to minimize chromatic aberration. A new ultra multi-coating on the outer surface of the front element is designed to reduce flare and ghosting. This lens balanced nicely on our test camera, the Fujifilm X-T1, despite its size: nearly a quarter-inch longer than the Fujifilm 56mm f/1.2, for instance. But it weighed only slightly less than that 56mm. True to the ILC ideal, it’s significantly lighter than full-frame lenses with equivalent focal lengths. We appreciated its smooth turning radius of 160 degrees, less than the Fujifilm’s 220 degrees whose “focus-by-wire” system made the turning radius seem very slow. The focusing numbers on the Rokinon’s barrel are marked in feet (orange) and meters (white) and were large and easy to read. In addition, an improved hood, included with the lens, now snaps on very securely. Trying it attach it, we were initially afraid to push the hood too hard for fear of breaking it; after applying some elbow grease however, we were impressed by how nicely it locked into place.

In the Popular Photography Test Lab, the lens performed quite well. Its SQF scores for sharpness and contrast were excellent. Very similar, in fact, to its next closest competitors, the Fujifilm 56mm lens and the Pentax 55mm f/1.4 DA* smc SDM.

In our tests using DxO Analyzer 5.3, it returned distortion results in line with the Fuji and slightly better than the Pentax (0.09%), garnering a 0.03% Imperceptible rating for barrel distortion—practically nonexistent. Vignetting disappeared by f/1.8, by all means a good score, better than the Pentax (gone by f/2), though not as good as the Fujifilm, which was entirely free of light falloff. This Rokinon shines at close focusing, resolving subjects as near as 19.62 inches, very close for an optic at this equivalent focal length. And its maximum magnification, 1:7.49, beat the Fujifilm’s 1:9.66; the Pentax, however, beat them both at 1:5.26.

Comparisons to other lenses are problematic, since almost nobody else makes a fast 50mm prime for APS-C-format or Micro Four Thirds cameras. So we also put this lens up again a number of full-frame 50mm f/1.4 optics from Canon, Nikon, Rokinon, Sigma, and Zeiss (the Milvus and Planar versions). While our SQF results were all similar, we found that some of our distortion findings quite different for the full-frame lenses: All but the Rokinon 50mm f/1.4 were in the Slight range, while Rokinon’s own full-framer hit the Visible rating. But used on a smaller APS-C or Four Thirds sensor, such distortion may not be as apparent.

Rokinon lenses are always priced reasonably low and this one is no exception. Going for at $549 (street) with a lens hood and quilted pouch), this 50mm f/1.2 costs nearly $250 less than the Fujifilm 56mm, and it’s cheaper than some of the 50mm full-framers by at least $400. We would be delinquent in our reporting, of course, if we didn’t point out that the other lenses we mentioned also have autofocus, which has significant advantages for some shooters. Many of those others are also built like tanks. But with all this performance to back up its quality, we’d say that if you don’t need AF, this Rokinon is a bargain that shouldn’t be missed.