Get ready for lots of reach in the Fujifilm X-series system. 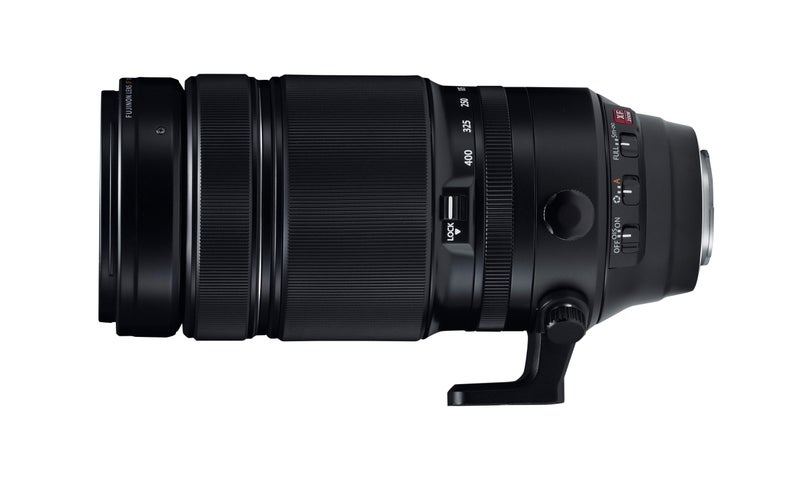 Fujifilm welcomes a long zoom to its expanding ecosystem of X-mount glass. The new optic is the first in its family to surpass the 250mm mark and also offers the broadest focal range of any XF zoom. Designed for the APS-C-format sensors in these mirrorless ILC bodies, its equivalent 152–609mm focal length makes it an ideal companion for nature and sports photographers. Although the lens includes a removable tripod collar, its 4-stop image stabilization goes a long way towards giving you the freedom to hand-hold shots in reasonably well-lit circumstances.

Given its $1,899 street price, this zoom is built to last, with a metal-clad body sporting 13 weather seals to protect against moisture and dust. A fluorine coating on the front element is similarly designed to ward off liquids and grit as well as to prevent smudging. Fujifilm wisely anticipated that outdoor shooters might want to use standard 77mm polarizing filters, so it put a retractable door in the included hood, letting you rotate filters while the hood stays locked in place.

The optical formula boasts 21 elements in 14 groups, of which five are low-dispersion and one is super low-dispersion glass, designed to combat chromatic aberration. All this makes for a large lens, coming in at just under 8.5 inches long at its shortest focal length and 10.75 inches racked out at 400mm. This is roughly equivalent in size to similar optics for DSLRs that we’ve tested: Canon’s 100–400mm f/4.5–5.6L IS (from back in 1999—we haven’t tested the 2014 update); Nikon’s 80–400mm f/4.5–5.6 VR; and Tokina’s 80–400mm f/4.5–5.6. Of the four, this new zoom is the longest at both its shortest and longest focal lengths, though comparable in diameter to the Nikon and Canon. Tokina’s zoom is considerably shorter, measuring just over 5.25 inches at its base 80mm focal length. Considering the relative compactness of Fujifilm’s camera bodies, the overall effect seems rather outsized.

Still, this Fujinon weighs less, at 3.13 pounds, than both the Nikon and Canon; only the Tokina is lighter at a mere 2.23 pounds. Despite its light weight, the new zoom feels surprisingly rugged, with ribbed grips that that are pleasant to hold.

In the Popular Photography Test Lab, our optical bench tests produced Excellent SQF results for sharpness and contrast at our 11×14-inch benchmark at both 100mm at 200mm, with a very slight dip in image quality at 300mm that nonetheless retained an Excellent rating. (Due to the technical limitations of our instruments, we were not able to obtain SQF data at 400mm.) This performance is on par with the Canon and Nikon zooms; the less expensive Tokina dropped to Very Good range at 200mm.

In our tests using DxO Analyzer 6.1, the Fuji performed admirably at controlling distortion, beating the other lenses at focal lengths beyond 100mm with an Imperceptible rating for pincushion distortion across its focal range. The Nikon and Tokina both dropped to Slight TYPE TK distortion beyond 135mm, while the older Canon lens produced Visible-rated distortion at best.

The Fujinon also held vignetting at bay superbly, with light falloff gone at the widest apertures throughout the four focal lengths we tested for—significantly better than the Canon or Tokina achieved, but roughly on par with the Nikon.

Finally, we were impressed with the optical image stabilization, which provided us with 4 additional stops of handheld shooting—an impressive advantage over the Nikon’s 2.5-stop stabilization results.

Despite the hefty price, wildlife and action shooters who use Fujifilm’s X-series cameras should feel confident that this zoom will meet your high expectations for perfomance. Its rugged build and remarkable resolving power, stabilization ability, and vignetting control leave little to be desired in a zoom with such a broad focal range.